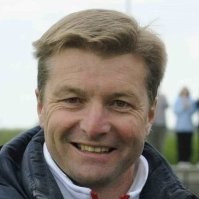 Leman, who was part of the men’s hockey team which won the Olympic gold medal at Seoul 1988, is set to go up against former Sports Minister Sir Hugh Robertson for the role when the election takes place in London on November 25.

Candidates had until yesterday to put their names forward for the position, which will be vacated by International Association of Athletics Federations President Coe, who will relinquish the chairmanship after serving one four-year term.

Other officials within British sport may have entered the race and Leman and Sir Hugh will find out if they have any further challengers later this month.

Leman, who initially ran in 2012 before withdrawing, told insidethegames that he had been considering running for the chairmanship since the Olympic Games in Rio de Janeiro in August, where he was in attendance to support the British team.

The GB Hockey head, who has served as a BOA board member since his election as President in 2007, conceded that vice-chairman Sir Hugh might be a “bigger name” in sport but remains confident he can be successful with his attempt at securing the top job.

“There was encouragement from people for me to stand and a lot have told me just to go for it, which I have,” Leman told insidethegames.

“I’m not just doing it to be part of the process – I accept Hugh is a much bigger name but I have the Olympic background and I have been working within the organisation for the last 10 years.

“I totally understand how sporting governing bodies work and I know the sporting landscape.

“I’m hoping that my strong Olympic background will be a big help.

“I will lobby and speak to all the representatives and I will certainly be taking on the fight.”

Leman is targeting “capitalising on the Team GB brand” should he be elected as BOA chairman next month following the country’s best-ever away Olympic Games performance in the Brazilian city.

He feels the role requires more “evolution than revolution” and is hoping to build on the platform laid by double Olympic champion Coe.

“It has been very positive in the last few years,” added Leman.

“Our relationship with UK Sport, for example, has improved significantly since London 2012 and it is in a much stronger state.

“We need to evolve and build on that.”