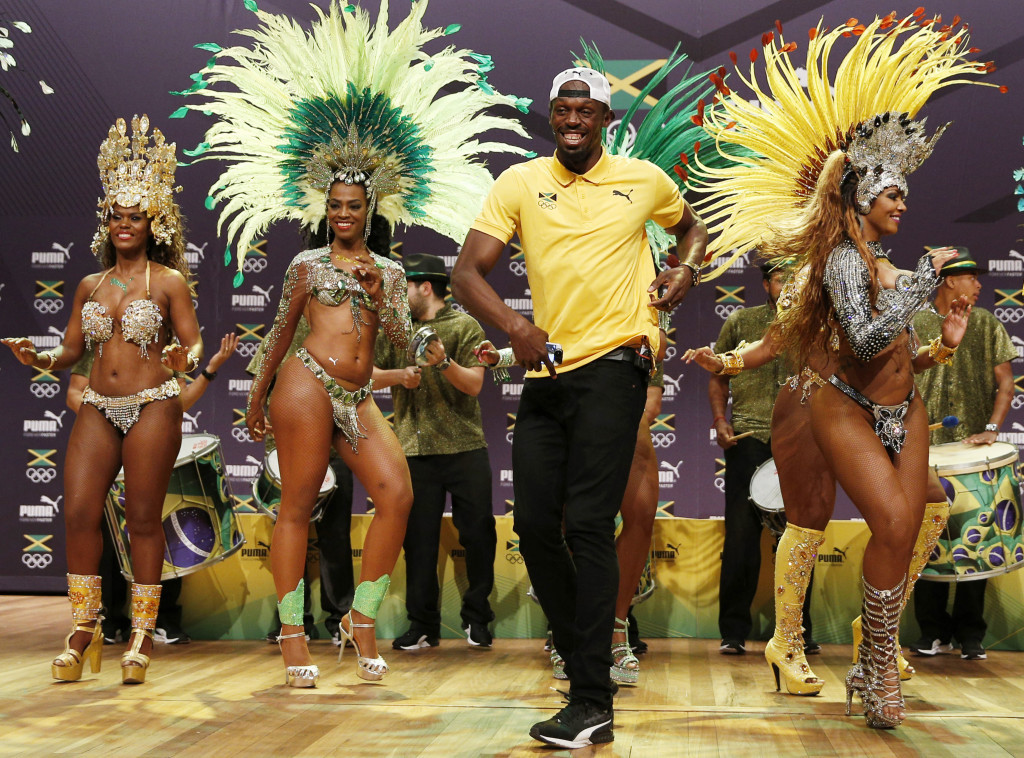 Will the Rio 2016 athletics programme, which gets underway tomorrow, become part of the Usain Bolt Narrative in the way that Beijing and London have already been?

As he seeks to round off his Olympic career with an unprecedented hat-trick of individual 100 and 200 metres titles on the new, blue track of Rio’s Olympic stadium, the 29-year-old Jamaican phenomenon has found a way - as he had to last year - of pursuing his high ambitions despite the niggling check of injuries.

Bolt had to pull out of the Olympic trials with a grade one hamstring tear, but has subsequently returned to winning form and his respectable if not remarkable best of 9.88 this season leaves him fourth in the world 100m listings topped by the 9.80 run by his 34-year-old US rival Justin Gatlin.

Gatlin, who won over 100 and 200m at the US trials despite having been troubled by an ankle injury, is second on the world 200m lists with 19.75, 0.01 behind his compatriot LaShawn Merritt, the former world and Olympic 400m champion who will seek his own double at these Rio Games.

Bolt has been beaten only once since September 2007 in his favourite event of the 200m - that was in the 2012 Olympic trials where he lost to Yohan Blake, who is now back in the mix after injury-ravaged years.

Injury has restricted him to just one 200m race this season, the relatively sedate win at London last month in 19.89; but this is the title he will defend with everything he has.

The situation is broadly similar to last year’s International Association of Athletics Federations’ (IAAF) World Championships in Beijing, where Bolt arrived in Beijing having had his preparations undermined by injury.

In China he found the way to retain both his titles.

Can Gatlin - who has his own ambitions to become the first man in history to regain an Olympic title having won in Athens 12 years ago - thwart him this time?

Given the US sprinter’s record of having had two doping sanctions, many in the sport will be hoping not.

Asked this week if he was confident there would be full houses for the athletics programme, IAAF President Sebastian Coe responded: “No,  I’m not confident we are going to have full houses. But the sales have been good.”

There will not be too many empty seats on Sunday night, when the athletes settle to their blocks in the men’s 100m final.

Contenders such as the US world indoor champion Trayvon Bromell in the 100, and Merritt in the 200 might upset the Bolt and Gatlin show, but the indications are that their rivalry will go a long way to defining the Rio 2016 athletics programme.

Not, of course, that it will be anything like the whole story.

Merritt’s attempted 200/400 double will also command attention, although, again, the fact that he returned to the sport in 2011 after a 21-month doping ban would dampen the sense of celebration should he succeed.

Despite his 400m experience he is far from the favourite over one lap given the presence of Grenada’s defending champion Kirani James and the South African who broke through to beat both at last year’s World Championships in an African record of 43.48, Wayde van Niekerk, with Merritt taking silver in a personal best of 43,65 and James bronze in 43.78.

Never before had three men broken 44sec in a 400m race; the Rio 2016 re-run promises to be electric.

Other hotspots in the programme - the men’s triple jump, where world and defending champion Christian Taylor could face a renewed challenge from the only other man who has approached Jonathan Edwards’s 1995 world record of 18.29m in recent years, Cuba’s Pedro Pablo Pichardo.

At last year’s World Championships, that competitive tension pushed Taylor to 18.21, putting him second behind Edwards on the all-time lists. Only another nine centimetres to go…

The women’s triple jump will also be fascinating as Colombia’s Caterine Ibarguen, who followed her silver medal performance at the London 2012 Games with a sequence of 34 wins which took in two world titles, attempts to earn the Olympic medal of top choice four years on.

But defending champion Olga Rypakova, who ended Ibarguen’s winning run in Birmingham two months ago, could rise to frustrate her once again.

South Africa’s Caster Semenya has been the dominating force in the women’s 800m in a year when she leads the world lists with 1:55.33.

Semenya looks capable of going a lot faster, but a stupendous victory could be awkward for the sport to assimilate given the vexed history that has accompanied a runner whose world title win in 2009 at the age of 18 was followed by her having to take a sex test.

When she broke the world 1500m record in Monaco last season, Ethiopia’s Genzebe Dibaba looked nailed on to win in Rio, but her outdoor season has been undermined by a toe injury and her best so far has been the 3:59.83 she ran in Barcelona on July 9.

Dibaba, who has never failed a doping test, will also have been profoundly jolted by the arrest of her coach, Jama Aden, in June on suspicion of doping irregularities.

The fates may decree that this is the moment for Kenya’s Faith Kipyegon, or even Britain’s Laura Muir, to rise and challenge.

Mo Farah, one of three British winners at London 2012 on the never-to-be-forgotten Super Saturday, is looking in good shape to defend his 5000 and 10,000m titles. His rivals will team up if necessary to try and bring him down, and the pressure upon the 33-year-old will be greater than ever.

Caleb Ndiku of Kenya and Hagos Gebrhiwet of Ethiopia could trouble him in the 5000, where he will be carrying the efforts already made in the 10,000m final - where his US training partner Galen Rupp, the London 2012 silver medallist, and Kenya’s Geoffrey Kamworor, who beat him to the IAAF World Half Marathon title in Cardiff earlier this year will await.

Farah’s fellow peak British performers on Super Saturday - heptathlete Jessica Ennis-Hill and long jumper Greg Rutherford - both have solid chances of retaining their titles, although the odds on all three coming up trumps again must necessarily be astronomical.

Rutherford, as so often, does not lead the year’s listings – super-talented US 22-year-old Jarrion Lawson has managed 8.58m, with the Briton joint seventh with 8.31 – but, as his collection of Olympic, world, European and Commonwealth titles very obviously indicates, he is a championship performer.

The story is similar in the heptathlon, where Ennis-Hill underlined her competitiveness last year by returning after childbirth to win the world title ahead of the US competitor who had set the early season marks, Brianne Theisen-Eaton.

It could be same again this year, although Ennis-Hill’s team-mate Katarina Johnson-Thompson could make a breakthrough.

Allyson Felix of the United States has had to forego the target of defending her 200m title and winning over 400m, following her failure to qualify in the former event at the punitive US Trials, but she can still become the first woman in athletics history to win five Olympic golds, with her main opposition likely to come from the Bahamas up-and-coming Shaunae Miller.

In the absence of Felix, world 200m champion Dafne Schippers of the Netherlands is the favourite.

Like her compatriot Bolt, Jamaica's Shelly-Ann Fraser-Pryce will seek a third consecutive Olympic 100m title in Rio, but her preparations have been spoiled by iinjury, which could provide team-mate Elaine Thompson, Ivory Coast's Murielle Ahoure, Tori Bowie of the United States or Schippers with a big opportunity.

Jamaica’s exuberant, up-and-coming talent of Omar McLeod can consolidate his growing reputation in the 110m hurdles.

The women’s 100m hurdles, courtesy of the US trials, will take place without Kendra Harrison, who lowered the 28-year-old world record to 12.20 in London last month, but the standard will still be unprecedentedly high and the title could go in one of several directions. To be watched with interest.

Kenya’s David Rudisha - whose world record 800m run of 1:40.91 to win in London 2012 was identified by his predecessor in that regard, Coe, as the track performance of the Games – is back to defend.his title and tops the world listings this year with 1:43.35, run three weeks ago in Hungary.

The untimely injury to Italy’s world indoor champion Gianmarco Tamberi, who had been the form athlete in the high jump approaching these Games, will open up a competition which could see Qatar’s Mutaz Essa Barshim, the second highest of all time behind world record holder Javier Sotomayor, become his country’s first Olympic champion.