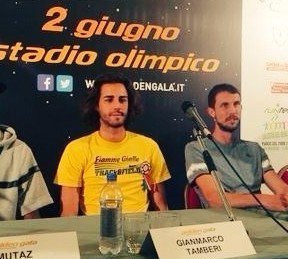 World indoor high jump champion Gianmarco Tamberi has said that fellow Italian Alex Schwazer, the 2008 Olympic 50 kilometres walk champion, who returned from a four-year doping ban last month to win a gold medal at the International Association of Athletics Federations (IAAF) World Race Walking Team Championships, should not have been allowed to represent his country, calling him “the Shame of Italy.”

Tamberi posted his opinions on Facebook and was happy to defend them today in response to questions at a press conference on the eve of the IAAF Diamond League meeting in the Stadio Olimpico.

“I have nothing against this athlete personally, he may be a nice person,” said the Tamberi, who turned 24 today.

“But as far as sport is concerned I don’t think he should have been in the national team.

“I don’t believe the result which saw him banned was casual.

“I’m not saying he should be in jail or anything, but I do not believe he is someone to give good values to the young people coming into our sport.”

Tamberi, a dashing, crowd-pleasing figure who for the last four years has had a “trademark” of shaving off the right half of his beard before competing, became the first Italian athlete for 15 years to win global indoor gold at the Championships held in Portland in March.

The decision to allow Schwazer a late entry into the Italian team in Rome last month was also criticised by the Australian who took silver in finishing more than three minutes behind him, Jared Tallent, who has been upgraded to the London 2012 Olympic gold medal following the doping ban handed out to Russia’s winner on the day, Sergey Kirdyapkin.

Schwazer was banned after a positive erythropoietin test ahead of London 2012.

The Italian had claimed he had retired from the sport following his positive test, but after his suspension drew to a close on April 29 he was named in the Italian team for the World Championships in Rome.

Canadian race walker Evan Dunfee also tweeted that he had been removed from the medal ceremony in Rome, with the Toronto 2015 Pan American Games 20km walk champion reportedly calling the Italian a “dirty cheat”.

Schwazer's former girlfriend, Olympic figure skating bronze medallist Carolina Kostner, had a 16-month suspension for being complicit in helping to cover-up his doping extended by a further five months in October by the Court of Arbitration for Sport.

Her suspension, backdated to April 1, 2014, has now drawn to a close with the skater free to resume competing.