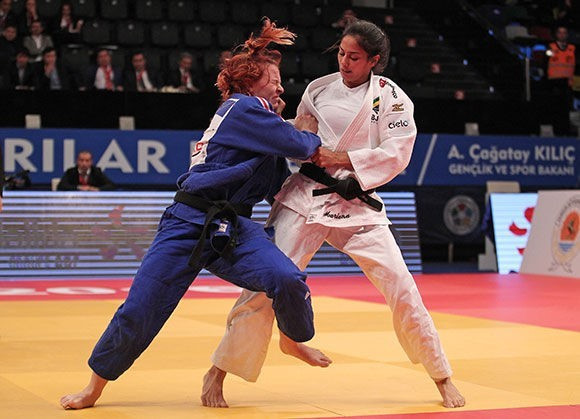 France claimed two gold medals on the second day of action at the International Judo Federation (IJF) Samsun Grand Prix as Margaux Pinot and Marie-Eve Gahie won their respective women’s under 63 kilograms and under 70kg categories at the Yasar Dogu Sports Arena.

Pinot was the first Frenchwoman to take her place atop the podium after overcoming world number 28 Mariana Silva of Brazil in their final before a crowd that included IJF President Marius Vizer.

It took little more than a minute-and-a-half for Pinot to execute a superb yoko-tomoe-nage but for no score as Silva landed on her stomach.

Thirty seconds from the end, it was Silva’s turn to put Pinot in danger with a huge uchi-mata, but again for no score.

After two minutes of golden score, the final concluded as it had started with a strong yoko-tomoe-nage for no score giving a penalty for passivity to Silva and victory to Pinot.

Following the all-French final of yesterday in the women’s under 57kg, Gahie and Fanny Estelle Posvite set up another in the under 70kg.

A little less active than her team-mate, Tbilisi Grand Prix silver medallist Posvite was penalised with a first shido for passivity.

Shortly before the end, Gahie penalised with a shido, putting the two in position to enter the golden score.

Gahie put Posvite off balance after 25 seconds of extra-time, leading to her opponent being penalised with a shido and succumbing to defeat.

The women’s under 63kg bronze medals went the way of Unterwurzacher and China’s Junxia Yang at the expense of Sweden’s Mia Hermansson and Austria’s Hilde Drexler respectively.

Puerto Rico’s Maria Perez beat Uzbekistan’s Gulnoza Matniyazova to the first women’s under 70kg bronze medal, after which China’s Chao Zhou fell to defeat at the hands of Venezuela’s Elvismar Rodriguez in the second.

Despite having previously won only one Grand Prix medal - a bronze in Qingdao last year - Kim eliminated seeded judoka Guillaume Chaine of France in the semi-finals.

The final proved to be a step too far for him, though, as Szwarnowiecki hooked his opposite number's leg for waza-ari with just over three minutes gone.

Kim seemed incapable of finding any solution against his Polish opponent, who, despite incurring penalties for passivity, maintained the score to secure victory.

The men’s under 81kg final saw Bulgaria’s Ivaylo Ivanov go up against South Korea’s Wang Ki-Chun, the former coming out on top.

Fresh from beating compatriot and Olympic champion Kim Jae-Bum in an epic semi-final, two-time world champion Wang soon found himself ahead of Ivanov by two penalties.

Ivanov fought back to score a brilliant waza-ari with ko-uchi-gake on the edge of the fighting area and ensure the win.

Belgium’s Joachim Bottieau saw off the challenge of The Netherlands' Frank De Wit in the first bronze medal contest and was joined on the third step of the podium by the United Arab Emirates' Sergiu Toma, who beat Kim in the second.

Action in Samsun is due to conclude tomorrow with the women’s under 78kg and over 78kg categories, and men’s under 90kg, under 100kg and over 100kg classes all taking centre stage.