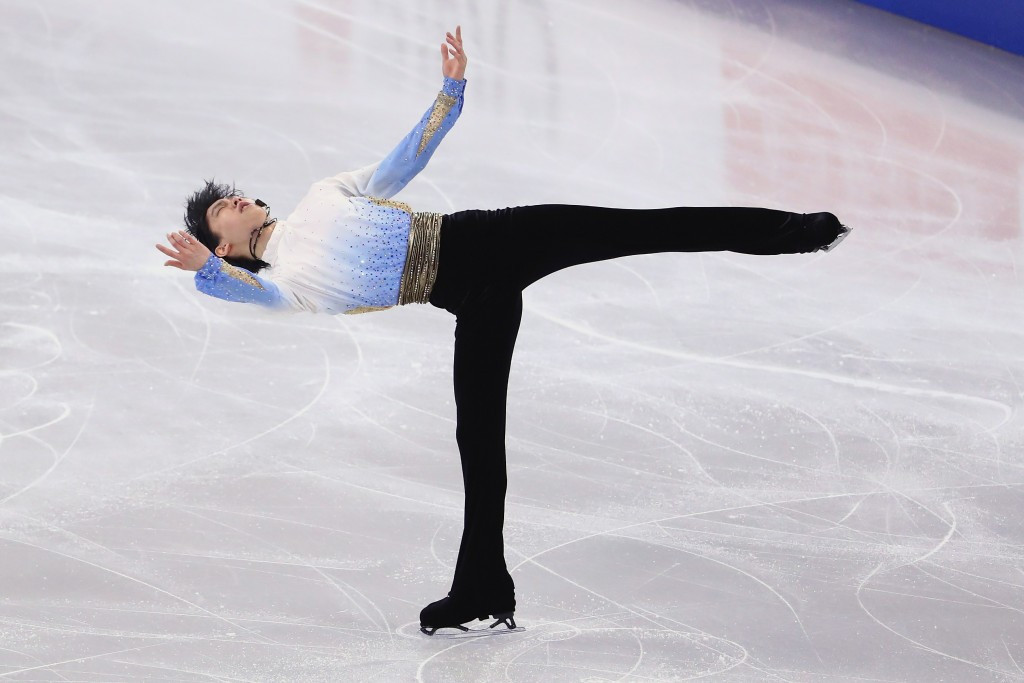 Hanyu put in a confident performance to Polish composer Frederic Chopin’s Ballade No. 1 in G minor, reeling off a quadruple Salchow, quadruple-triple toeloop combination, triple Axel and three level-four spins for a score of 110.56 points.

The Sochi 2014 gold medallist is looking to secure another major title having triumphed at the NHK Trophy in Nagano in November and the Grand Prix of Figure Skating Final in Barcelona in December.

"To be honest, I am very, very happy right now, more so than after NHK Trophy or the Grand Prix Final," said the 2015 world silver medallist.

"But at the same time, I cannot say that it was a complete programme, such as the quality and speed of the quad toe, and the level three on my step sequence.

"I was a little bit nervous before the short programme because my practice yesterday did not go very well and I faced multiple obstacles in my training leading up to this event.

"But I’ve learned that this is natural, and I think it was good that I was able to control myself and my performance regardless."

Defending world champion Javier Fernandez of Spain opened his Malaguena programme with a quad-triple toe combination but then fell on the quad Salchow.

Canada’s Patrick Chan’s routine to Mack the Knife featured a quad-triple toeloop combination, triple Lutz and level-four spins and footwork, but he crashed on his triple Axel.

Japan’s Shoma Uno lies in fourth on 90.74 points, while China’s Boyang Jin became the first skater to land a quadruple Lutz at the ISU World Figure Skating Championships and finds himself in fifth on 89.86 points.

Russia’s Mikhail Kolyada rounds out the top six on 89.66 points.

A total of 30 men competed in the short programme with the top 24 advancing to the free skating on Friday (April 1).

In the short dance, defending world champions Gabriella Papadakis and Guillaume Cizeron of France hold the lead after scoring a personal best 76.29 points.

They are followed by team-mates Madison Chock and Evan Bates, the 2015 world silver medallists, with a season’s best 72.46 points.

Skating last out of 30 couples, Papadakis and Cizeron produced a fluid dance to Evgeni's Waltz from the movie W.E and March by Hugo Chouinard, earning a level four for all five elements.

"We are so proud to have achieved this high score here," said Cizeron.

"We are competing with really strong skaters here, skaters that we didn’t compete with all season.

"We were really focused and maybe a bit more nervous than in the past years.

"It is the first time we will enter the free dance being in first place.

"In the free dance, we want to stay focused.

"You never know what will happen."

Action in Boston is due to continue tomorrow with the ladies’ short programme and free dance.