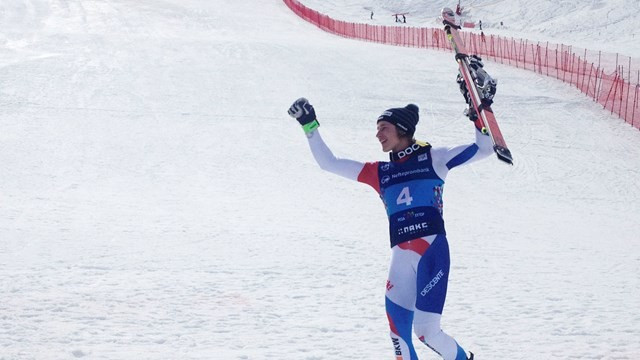 Odermatt clocked an overall time of 2min 14.32sec to take victry ahead of nearest challenger, France's Elie Gateau, who was 0.37 seconds adrift in second place.

Austria’s Maximilian Lahnsteiner clinched the final spot on the podium as he came through to take the bronze medal in a combined 2:15.47.

The Swiss put himself in contention for the gold medal by finishing in the second fastest time in the opening run, completing the course in 1:07.58, 0.57 behind leader Simon Mauerberger of Italy.

The Italian was already behind at the intermediate split time in the second run before he skied out and failed to finish, ending his hopes of claiming the Alpine junior world title.

Odermatt had no such difficulties as he powered home in 1:06.74, the fastest of all 48 finishers, to ensure he secured gold.

His victory maintained the impressive display from the vast array of talent within the Swiss ranks as the country now has a total of six medals, including three gold, one silver and two bronze.

The 18-year-old followed in the footsteps of compatriot Jasmina Suter, the winner in yesterday’s women’s giant slalom race.

“This is unbelievable,” Odermatt said.

“After a good first run I wanted to go full speed in the second run to make sure I would land on the podium.

“That it was enough to take gold is crazy.”

The event in the 2014 Winter Olympic and Paralympic Games host city is due to continue on Saturday (March 5) with the men’s and women’s slalom races.