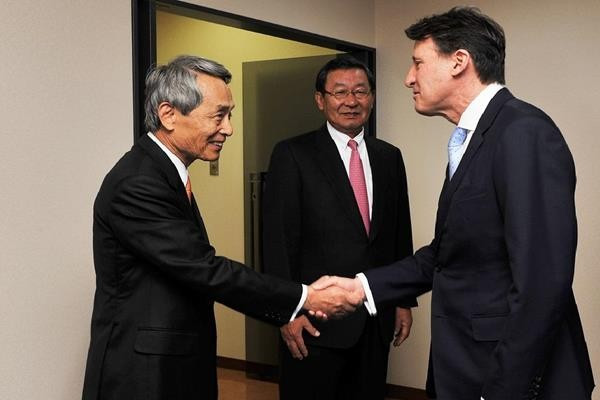 An accelerated bidding process has been opened by the International Association of Athletics Federations (IAAF) for the reallocation of next year's World Race Walking Team Championships and World Junior Championships after both events were taken away from Russia.

The decision to redistribute the events follows Russia's suspension after publication of a World Anti-Doping Agency Independent Commission which found evidence of state-support doping.

Launch of the new process has coincided with IAAF President Sebastian Coe visiting Tokyo to hold talks with the world governing body's marketing agents Dentsu and several of the sport's key sponsors.

The World Race Walking Team Championships had originally been awarded to Cheboksary and been due to take place on May 7 and 8.

The World Junior Championships were due to be staged in Kazan, host of the 2013 Summer Universiade, on July 19 to 24.

The IAAF have now given countries interested in hosting either event until Monday (December 7) to express their interest.

A conference call for those who come forward is planned for December 10 with bid documents due to be submitted by December 22.

An electronic vote among the IAAF's ruling Council is then due to be held on January 7 to choose the new host cities.

Coe's visit to the Japanese capital had been planned before the current crisis which has seen his predecessor Lamine Diack placed under investigation in France for allegedly accepting money for covering up positive drugs tests involving Russian athletes.

The current situation with the All-Russia Athletics Federation (ARAF) is certain to have been near the top of the agenda when the Briton met Tadashi Ishii, the chief executive of Dentsu.

Coe is also due to meet with senior officials from Tokyo 2020 during his visit.

Related stories
December 2015: Restoring athletics' credibility has to be Coe's priority, warns Michael Johnson
December 2015: Athletics is at "the crossroads" Coe tells British Parliament as defends ability to lead IAAF
November 2015: IAAF accused of trying to "muddy the waters" by anti-doping experts following defence of testing regime
November 2015: IAAF claim they are a "pioneer" in fight against blood doping as they clear Radcliffe of doing anything wrong
November 2015: Coe resigns Nike role to avoid claims of conflict of interest with position as IAAF President