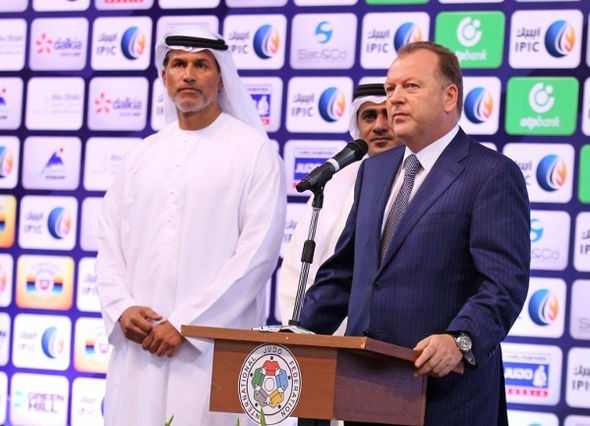 Vizer met with Israel Judo Association (IJA) President Moshe Ponti in the United Arab Emirates' capital where it is claimed they agreed that the hospitality of the local organisers and the people in Abu Dhabi was "impeccable" and the support of everyone associated with the event was "beyond expectations".

Former world champion Yarden Gerbi and reigning European champion Sagi Muki won bronze medals for Israel during the event in the women’s under 63 kilogram and men’s under 73kg categories respectively, but were made to compete in uniforms with IJF insignia along with six of their compatriots.

Israeli athletes competing in the Arab world have at times been asked to hide their country’s flag in exchange for visas to enter certain countries, which have no diplomatic relations with Israel and do not recognise it.

The occurrence in Abu Dhabi led to Israel’s Minister of Culture and Sport Miri Regev calling an emergency meeting with the heads of the country's sports associations to discuss the issue.

She also asked Prime Minister Benjamin Netanyahu to help her in the fight to avoid similar occurrences in the future.

Vizer has played down the issue, however, highlighting the positive aspects of the event.

"You had the courage to come here," said Vizer of Ponti.

"And your athletes had the courage to compete.

"We worked together with the Organising Committee and the Israeli delegation to make this event a success.

"The reaction of the public, the hospitality of our hosts and the behaviour of everyone proves that in the end sport wins."

The IJF claimed the decision to have Israeli judoka compete under its flag was based on a proposal made by the IJF Executive Committee and was fully approved and supported by the IJA and Ponti "to guarantee the security of the Israeli delegation and of all the participants in the Abu Dhabi Grand Slam".

Ponti said: "We did not want to risk our athletes' safety and we did everything possible to ensure that the whole event would function smoothly.

"Arriving at this decision was not easy but we fully supported the proposal made by the IJF and its implementation of the same.

"Before coming here we didn’t really know what to expect and that is why we treaded on the side of caution to ensure the success of the event.

"Everybody in the venue knew that our athletes were from Israel and I was really moved when I saw the public cheering for our competitors, especially the younger supporters."

Vizer expressed his hope that the geopolitical situation would improve soon so that Israeli judoka would be able to compete in the Abu Dhabi Grand Slam next year without any hindrance.

He also claimed that if Israel wished to host an IJF event in the future it would get the complete support of the world governing body.

"Every step you take can be seen in either a negative or a positive light," said Vizer.

"We definitely see what happened here in Abu Dhabi as positive.

"It is the case for the athletes themselves, who made history, and it opened a door for the future.

"Seeing the young people from Abu Dhabi cheering for the Israeli judoka is definitely a step forward.

"What politics cannot achieve, sport and judo can."