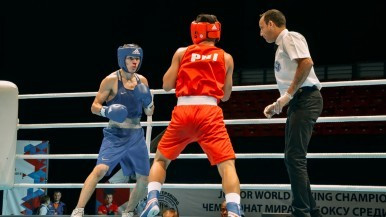 The United States enjoyed six victories on day five of the AIBA Junior World Boxing Championships in the Russian city of St Petersburg.

In all there were 72 bouts in eight weight divisions and the Americans enjoyed strong progress across the categories as the tournament now reaches the quarter final stage from tomorrow.

At light welterweight, Leon Lawson eliminated Tajikistan's Fozil Radzhabaliyev and the sixth win for the Americans was at heavyweight level as Richard Torrez stopped Moldova's Tudor Grisman in the opening round.

Castro said: "I thought it was a tough fight against a tough opponent, who came to fight, so I am satisfied with my performance.

"I was thinking about the gold medal, that I can’t let my opponent ruin my dream of winning that gold, and that I have already put the work in the gym so I have to trust my abilities.

"One of my coaches told me to fight like this is the gold medal bout, and that’s what I did.

"My opponent was hard hitting, slick, and a tall fighter who could fight both southpaw and orthodox.

"He made me work for this victory."