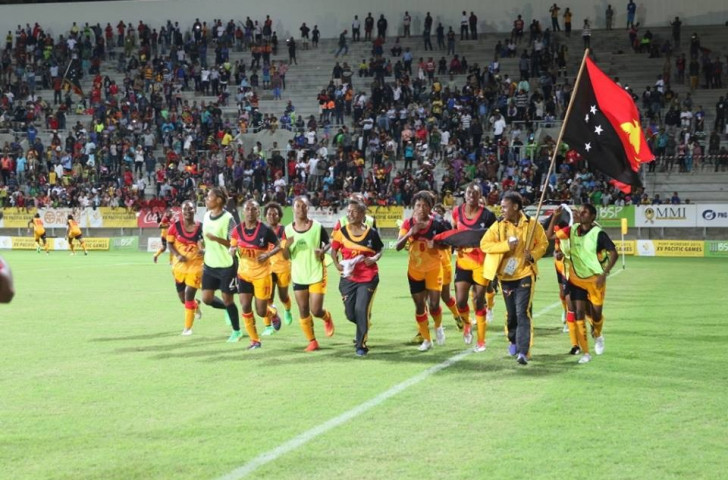 Host nation Papua New Guinea booked their spot in the Rio 2016 Olympic qualification football play-off against New Zealand by successfully defending their Pacific Games gold medal as Marie Kaipu’s first-half strike was enough to give them a scrappy 1-0 victory over New Caledonia at the Sir Hubert Murray Stadium today.

In what was a gold medal contest that will not live long in the memory, Kaipu capitalised on a costly error by New Caledonia goalkeeper Honorine Pouidja to fire home from close range in the 21st minute, which proved to be the game’s solitary goal.

New Caledonia had nearly 70 minutes to fight their way back into the match but were unable to find an answer as they suffered a second consecutive final defeat to Papua New Guinea.

The result for the hosts maintains their monopoly of the event at the Pacific Games as they have won every gold medal since the sport was introduced onto the programme at Suva in 2003.

Their victory prompted joyous scenes at the final whistle in front of the best crowd the Sir Hubert Murray Stadium has seen at these Games, with desolation evident on the faces of the New Caledonian side after falling short once again.

The game’s crucial moment came after 21 minutes when Pouidja could only parry a weak Papua New Guinea effort straight into the path of Kaipu, who made no mistake to give her side an early advantage.

Chances were then few and far between as New Caledonia struggled to react to the setback of going behind, with the hosts content to sit back and soak up pressure before counter-attacking when their opponents ventured forward.

That trend continued after the restart, with the 2011 silver medallists still struggling to fashion any real clear-cut opportunities, and in the end Papua New Guinea were able to hold out for a deserved win to add yet another gold to their country's medal tally.

Earlier on, Cook Islands ensured they finished their tournament on a high as they clinched their first-ever Pacific Games football medal with a comfortable 2-0 win over Samoa in the bronze medal match.

Tepaeru Toka edged her side in front just before the break, with Maeve Carr netting the second just after the restart and despite a lack of experience at this level, they were able to cling on for a famous victory.

“This is 100 times better than amazing,” Toka said.

“It’s the best thing that’s ever happened to me.”