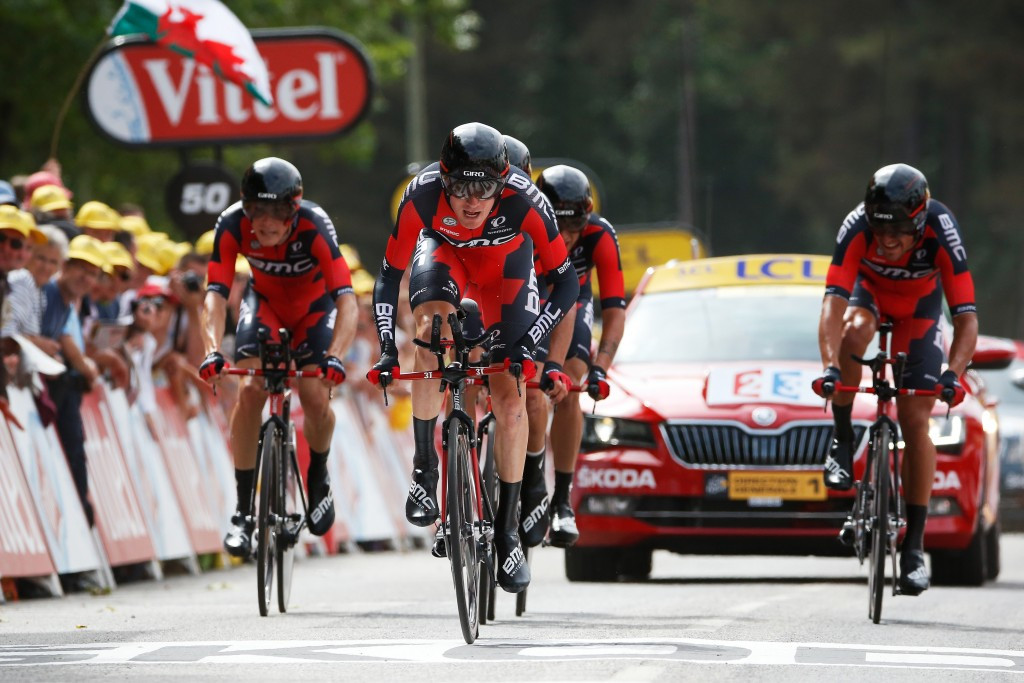 BMC Racing claimed the team time trial honours by finishing a second clear of Team Sky to earn victory on stage nine of the Tour de France, although their performance around the 28 kilometres course from Vannes to Plumelec was not enough to take the yellow jersey off Britain's Chris Froome.

World team time trial champions Orica-GreenEdge were never likely to be a factor today due to the crashes and subsequent withdrawals of several of their riders early in the race, leaving the door open for rival squads to claim a stage victory in the only team time trial of this year's race.

The stage also presented a opportunity for the general classification contenders to gain on their rivals ahead of the first rest day of the race, due to take place tomorrow, with Movistar aiming to take full advantage of the discipline to boost the prospects of their leader, Colombia's Nairo Quintana.

Utilising the time trial expertise of Britain's Alex Dowsett and Italy's Adriano Malori, the Spanish registered team were able to post a time of 32min 19sec to move Quintana above the defending champion Vincenzo Nibali by 23 seconds in the standings.

He also made a gain of 24 seconds on Spain's Alberto Contador after his Saxo Tinkoff team were off the pace during the discipline.

Quintana lost a further three seconds to Froome, though, after Team Sky posted the second fastest time of the day in 32:16.

Froome's nearest rival currently is America's Tejay van Garderen and it was his BMC team who produced the best ride, as with Australia's Rohan Dennis, winner of the individual time trial on stage one, among their team they managed to dip a further second below Team Sky's time.

Froome was delighted Team Sky's start to the Tour de France, despite missing out on the team time trial, as he lies 12 seconds clear of his nearest rival van Garderen, as well as being 1:03 and 1:59 ahead of Contador and Quintana respectively following the first nine of the 21 stages in the three-week race.

"The first phase has gone better than any of us in the team could have imagined," the 2013 champion said.

"I haven't lost anything and I even gained time during the first week, it puts us in a fantastic position.

"The pressure is certainly not on my shoulders, it's up to my rivals to make it up.

"I didn't expect Vincenzo Nibali to have lost so much time by now.

"To be totally honest, before the Tour I thought he'd be the one of my rivals who would have gained the biggest time in the first week."

Following the rest day, the race favourites are sure to be at the front of the race with the 167km stage 10 due to end with a steep ascent up La Pierre-Saint-Martin.