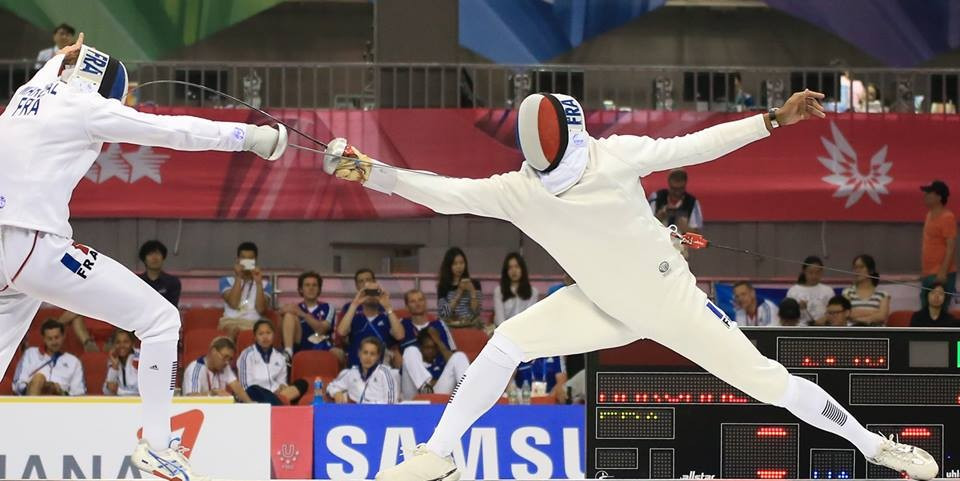 France claimed gold medals in both the men’s epee and womens foil fencing events on second day of full competition at the Gwangju 2015 Summer Universiade, in which six titles were decided in both shooting and swimming.

Having won gold on the opening day in the women’s individual epee, French domination of the discipline was confirmed by seeing their athletes Yannick Borel and Virgile Marchal advance to the gold medal match having earned impressive semi-final victories in the Kimdaejung Convention Center.

Borel was able to take charge of the match in the early stages and refused to relinquish his advantage as he beat his compatriot 15-11.

The women’s foil final proved to be a closer affair as France’s Jeromine Mpah-Njanga was forced to hold off a fightback by Russia’s Svetlana Tripapina to secure her place on top of the podium with a 15-13 triumph.

The first day of shooting medals saw Italy and China claim five of the six gold medals on offer, with Zhiguo Liu earning one of the most thrilling victories of the day in the men’s 10 metre air rifle as he posted a score of 207.5 points to beat fellow Chinese athlete Haoran Yang to gold by just 0.2 of a point.

The Chinese team proved almost untouchable in the 10m air rifle events as they won both the men’s and women’s team competitions, however Iran’s Najmeh Khedmati claimed the women’s individual title with a winning score of 206.6.

Italy’s Silvana Stanco hit 11 targets to her teammate Federica Caporsucio’s nine to beat her to women’s trap gold, while the pair joined up with Valeria Raffaelli to win the women’s team event ahead of Russia.

The United States had proved to be the strongest nation in the Nambu University International Aquatics Center on the opening day of competition.

But Lisa Bratton was their only success on the second day of swimming as she won the women’s 200 metres backstroke in 2min 09.31sec.

It was a day when the gold medals in the pool were spread among the nations as Brazil, Kazakhstan, Japan and the Ukraine earned on title apiece.

It China’s Ying Lu who produced the most notable performance, however.

The 26-year-old produced a powerful swim in the women’s 50m butterfly final to set a Universiade record time of 25.72sec to win gold ahead of Russia’s Svetlana Chimrova who finished in 26.23 to take silver, while Australia’s Holly Barratt was 0.18 seconds further adrift in third.

Russia were able to take diving gold ahead of the Chinese in the men’s synchronised 3m springboard final with the Novoselov brothers, Evgenii and Viacheslav, posting a winning total of 394.50 points with China’s Yanan Li and Yuming Zhong ending just 6.15 behind for silver.

Ying Wang was able to add to China’s gold medal haul in the diving by winning women’s platform gold ahead of her teammate Han Wang and Japan’s Mai Nakagawa by ending on a score of 303.10 points.