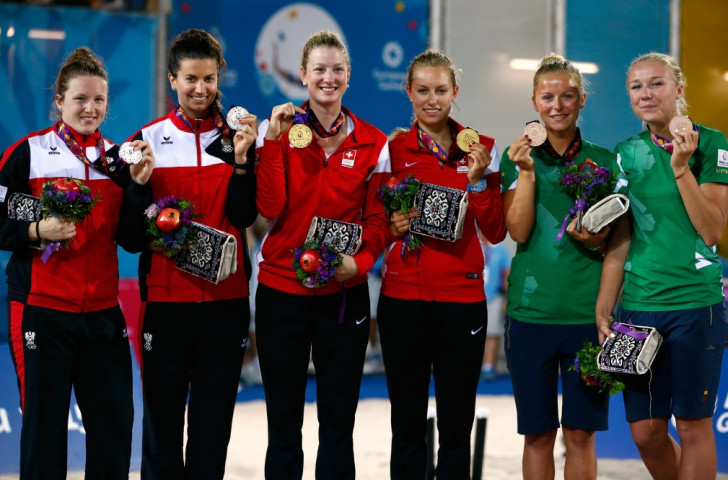 After both pairs shared the spoils in the opening sets, the Swiss team dug in during the decider, coming from behind on several occasions before they saw out a 21-16, 14-21, 15-13 win in front of a raucous pocket of supporters.

The result gave Switzerland their seventh gold medal of the Games.

But the wait for an Austrian crown at Baku 2015 goes on.

“We were behind them all the time,” Betschart said.

“It's unbelievable and we didn't expect it.

In the bronze medal match, Lithuanian duo Ieva Dumbauskaite and Monica Povillaityte got the better of Italian pair Laura Giombini and Guilia Toti with a straight-sets 21-19, 21-19 triumph to the delight of the contingent from their supporters inside the Beach Arena.

Eiholzer and Betschart took a while to get going in the first set as the Austrian duo demonstrated their power and touch, racing into an early lead to put the pressure on their Swiss counterparts.

Once they found their feet, though, Switzerland began to manoeuvre their opponents around the court almost at will, eventually cruising to a 21-16 success.

But Plesiutschnig and Schutzenhofer are made of stern mettle and they dominated the second set, attacking the Swiss serve and exhibiting a delightful array of flicks and drop shots on their way to levelling proceedings.

Soon enough, they themselves had surged into a commanding 5-1 lead in the third set but Switzerland clawed their way back into the contest, squaring at 7-7 and then again at 13-13.

They were able to snatch the final two points of the match to claim an enthralling win and send the vociferous backing from the stands into raptures.

The bronze medal match also provided the crowd with an exciting battle that could have gone either way.

It was the Lithuanians who had that extra touch of composure around the net, with Dumbauskaite’s spikes proving particularly effective.

The Italian team could not quite convert the opportunities that came their way and they went on to lose a narrow opening set by just a two-point margin.

That seemed to fire both Giombini and Toti up as they opened up a three-point lead in the second, but costly errors at crucial times let the Lithuanians off the hook and they took advantage by winning the set by the same margin as the first to secure the final podium place.

The men’s bronze and gold medal matches are due to round off the beach volleyball competitions at the European Games tomorrow.