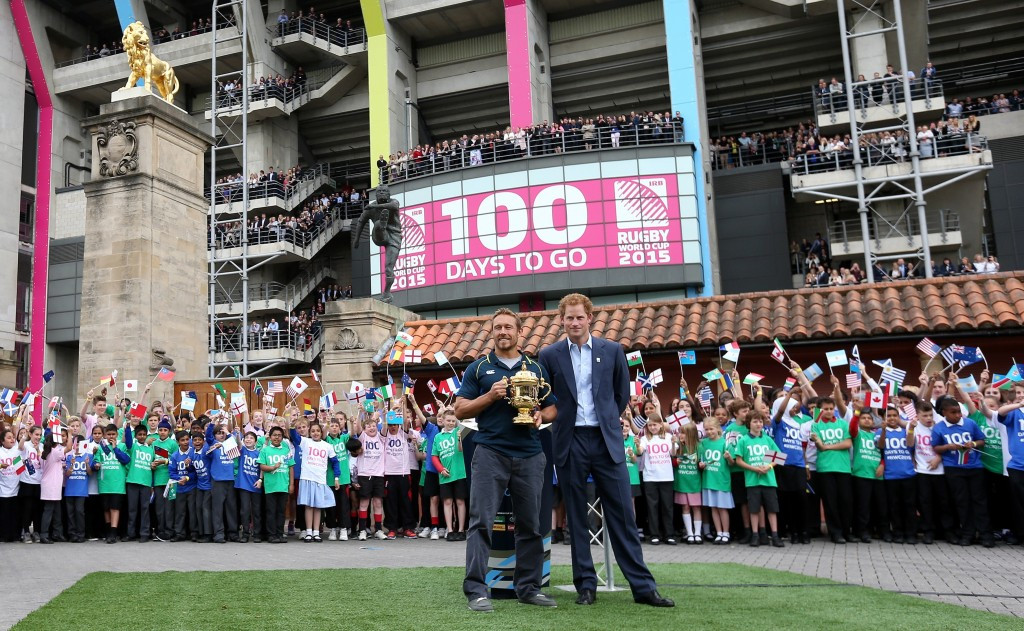 Prince Harry joined England’s 2003 Rugby World Cup winners Jonny Wilkinson and Will Greenwood to launch the Trophy Tour for this year's tournament, which is due to start in London in 100 days.

Around 300 events are due to take place as part of the Trophy Tour, with the Webb Ellis Cup heading to rugby clubs, sporting events, schools, community festivals and iconic landmarks, across Scotland, Wales and Northern Ireland, as well as England.

It follows on from the successful international tour which aimed to drum up excitement ahead of the tournament, due to begin on September 18, when hosts England face Fiji at Twickenham Stadium.

“I am pleased to send the Webb Ellis Cup on the Rugby World Cup Trophy Tour which will enable rugby fans from across the country to play their part in the build up to the tournament,” Prince Harry said.

“Rugby is a game built on values – respect, pride, teamwork and discipline.

“This tournament – the most significant moment in English rugby since that night in Sydney in 2003 – has the ability to broaden the reach of the game and deliver a long lasting legacy for the sport.

“With 48 matches spread across the country, I hope that every community can be part of this tournament and celebrate the game of rugby.”

Scotland, Northern Ireland and the Republic of Ireland will each host the tour for five days, while the trophy will be in Wales for ten and England for 75 days before arriving at the Opening Ceremony, which precedes the opening match of the tournament.

As part of the programme 15,000 tickets will be distributed across the host cities, the Mayor of London's Sports Legacy Programme, RFU Regional Legacy Boards, the Injured Players Foundation and Tickets for Troops.

Additionally, the Festival of Rugby 2015 programme, delivered in partnership with the RFU, was also launched today, and is aimed at enabling any event with a connection to rugby or with a rugby theme to be part of a nationwide festival.

The programme, due to run until October 31, is supported via www.festivalofrugby2015.com, with the opening events including a tag rugby word record attempt at Luton Rugby Football Club attended by England Women's World Cup winner Maggie Alphonsi.

“Rugby World Cup 2015 has the ability to create a step change in interest in participation for Rugby in England that will benefit generations to come,” said Ritchie.

“The RFU aims to deliver a meaningful legacy by creating more capacity, improved facilities, more people – coaches, officials and volunteers - and more schools offering rugby and we continue to work closely with England Rugby 2015 to maximise the impact both in 2015 and beyond.”

The Rugby World Cup Trophy Tour schedule can be found by clicking here.

Click here to view tickets on sale at tickets.rugbyworldcup.com