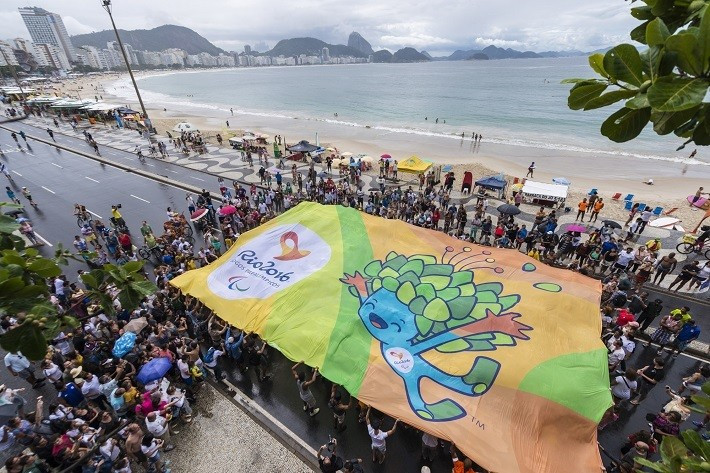 Rio 2016 has marked the 500 days to go until the Paralympic Games milestone with celebrations and a flash mob on Copacabana beach.

About 200 dancers, some of them in wheelchairs, gathered at the iconic setting to perform routines that blended traditional Brazilian samba and forró with contemporary dance, hip-hop and Brazilian funk.

Tom, the Rio 2016 Paralympic Games mascot, joined in, while a series of recorded voices announced “500 days to the Paralympic Games” in a number of languages, including French, Mandarin, Arabic, Spanish and Russian, before the show exploded into Rio de Janeiro by American soul singer Barry White and Xote de Copacabana by Brazilian artist Jackson do Pandeiro.

“It was really cool,” said Felipe Berty, a 21-year-old from Niterói who was one of the wheelchair users who took part.

“This shows the capacity of people with a disability to join in with these kind of things with people who don’t have a disability.

“I’m very proud to be part of this celebration.”

The show was choreographed by theatre director and dancer Deborah Colker, the first Brazilian artist to receive a Laurence Olivier Award, and also included some spectacular acrobatic moves and the hoisting of a giant flag featuring Tom.

“The idea was to bring together different kinds of people and celebrate as one, joining people with different body conditions together in joy,” Colker said.

“The aim was to celebrate through dance, on the street, different kinds of movement.

“The Paralympic Games are a gift for Rio.

“Overcoming challenges are part of life for everyone and when we see people who overcome their problems, this is a real inspiration, more than any class or book.”

Mariana Mello, Rio 2016’s head of Paralympic integration, added: “When Brazilians see up close the Paralympic athletes in action, and understand that their abilities are far great than their impairments, this will leave an immeasurable legacy for millions of people with a disability.

“The athletes are already competing in qualification events and the Games organisers are finalising their plans and entering operational mode.

“Tickets will go on sale soon and fans will also be able to start preparing.”

Nations around the globe were also celebrating the milestone and spoke of their excitement ahead of Rio 2016.

“SASCOC is working around the clock to ensure that our athletes are well prepared to take on the world at this prestigious event,” Tubby Reddy, chief executive of the South African Sports Confederation and Olympic Committee, said.

Meanwhile, Fiona Allan, chief executive of Paralympics New Zealand, said she is confident her nation’s athletes will meet their target of 12 gold medals.

“The year before a Paralympic Games is always hugely significant as athletes aim for performances that will contribute to qualification and ultimately selection in the New Zealand Paralympic team,” she explained.