The first edition of the ANOC World Beach Games took place in Qatar between October 12 and 16, 2019.

More than 1,200 athletes from 97 countries competed in exciting beach, water and action sports.

Fourteen disciplines in 13 sports were on the programme in all, and were all designed to appeal to a young audience.

Spain topped the medal table with seven golds, one silver and two bronze.

In July, representatives from more than 80 countries visited Qatar to inspect preparations.

They toured venues and received information on areas including security, anti-doping and ticketing.

Presentations on arrivals and departures, accommodation, transport, media, communications and ceremonies were also made.

At the 2021 ANOC General Assembly in Crete, Indonesia was announced as the sole candidate for the 2023 ANOC World Beach Games. 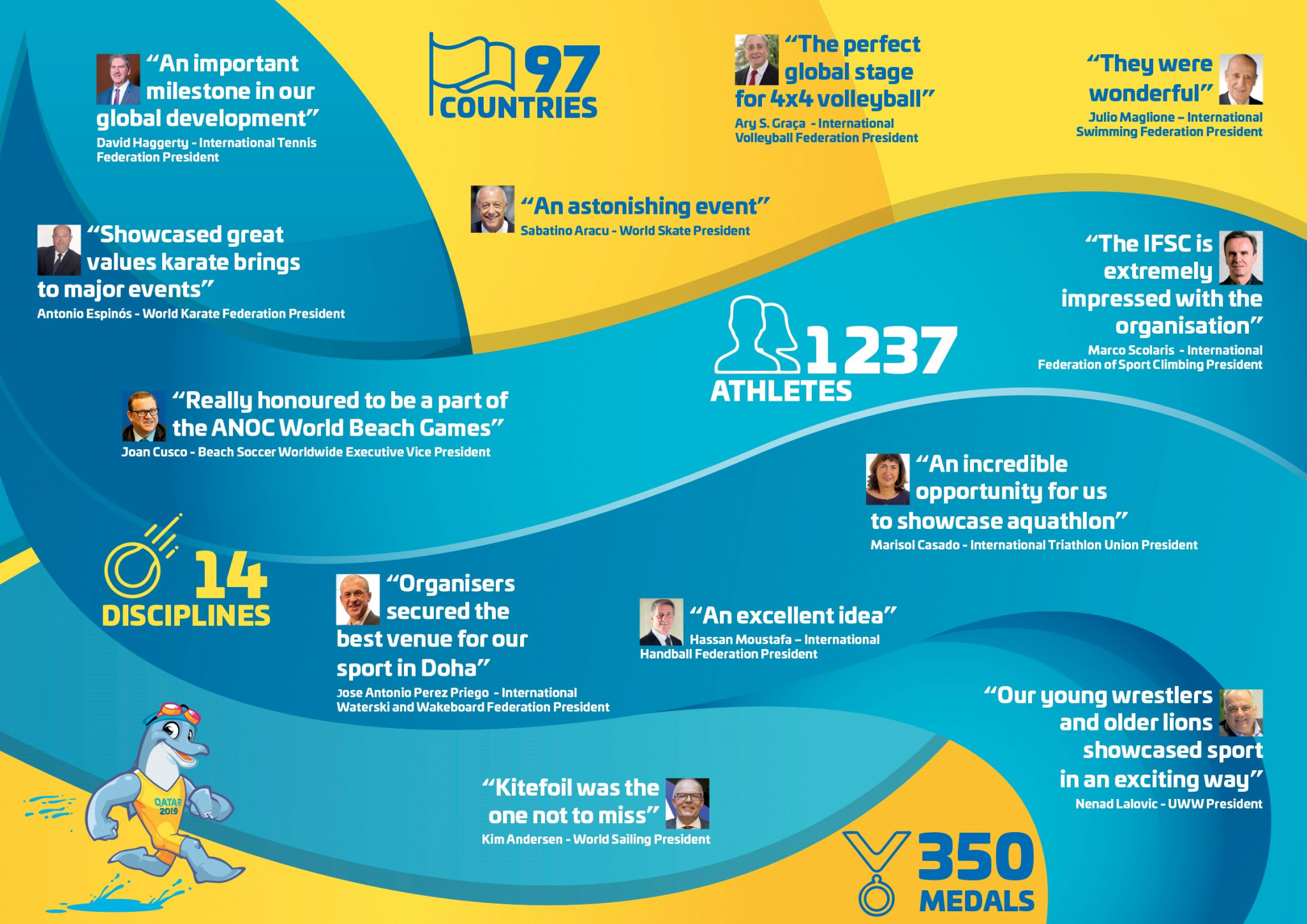 Following the recommendation of the President, the ANOC Gala Awards Dinner was created and held for the first time in Bangkok in 2014 during the ANOC General Assembly. After the first successful event, ANOC renamed the ceremony to the ANOC Awards.

The ANOC Awards give ANOC the chance to commend the achievements of NOCs, athletes and key members of the Olympic family and promote best practice. They also provide an opportunity for the NOCs to take part in an event in which they can celebrate their work and the work of their colleagues.

The 2015 ANOC Awards took place in Washington D.C on October 29 and celebrated the achievements of athletes from the five continental Games.

In 2016, the ANOC Awards were hosted by Doha, Qatar on November 15 and celebrated the achievements of NOCs and their athletes from the Rio 2016 Olympic Games.

The 2017 ANOC Awards took place in Prague, Czech Republic on November 2 and celebrated the best male and female sporting performance from each continent.

In 2018, the ANOC Awards were held on November 28 during the 23rd General Assembly in Tokyo, Japan.

The focus of the awards was the Pyeongchang 2018 Winter Olympics.

The 2019 Awards were held alongside the first ANOC World Beach Games in Qatar in October, and recognised stars of the continental Games.

Greek island Crete hosted the 2021 Awards which honoured the stars of the postponed Tokyo 2020 Olympic Games.

The 2022 ANOC Awards are due to be held alongside that year's General Assembly in Seoul.

There are 12 Commissions and Working Groups which were confirmed in February 2019. They meet up to three times a year and place a strong emphasis on delivering tangible and measurable results for the benefit of ANOC's stakeholders.

The Commissions and Working Groups present their ongoing progress to the ANOC Executive Council before presenting their year's achievements at the ANOC General Assembly towards the end of each year.

The details of the 12 Commissions and Working Groups can be found below:

The headquarters showcase ANOC’s commitment to modernisation and provide the best possible environment from which to serve the NOCs. The office serves as ANOC’s global operational hub, as well as a base to welcome members of the world’s NOCs and other stakeholders of the Olympic Movement.