There are two Olympic disciplines: Greco-Roman wrestling and men's freestyle wrestling. Click on one of the images below or scroll down to find out more about each discipline. 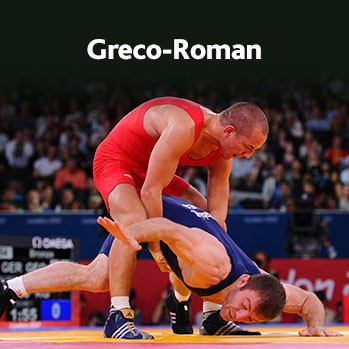 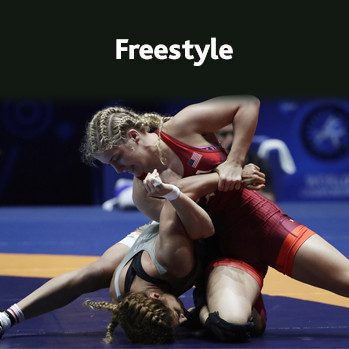 Greco-Roman wrestling sees two male competitors compete in two-three minute periods. The aim of each wrestler is to pin their opponent's shoulder to the mat and should they achieve their goal, they are awarded the victory by "fall". The wrestlers aim to pin their opponents by using throws, locks and clinching techniques, but are only permitted to use their upper body to achieve the holds.

If they are unable to achieve a win by fall, the contest continues until the end of the second of two three-minute periods. At the close of regular time, the winner is decided according to the technical points scored, with a take-down scoring between one to five points should they gain control of at least three parts of their opponent’s body on the mat.

A wrestler can score a point through a reversal, gaining control from a defensive position. Should they expose their opponent's back to the mat, they can be awarded either two or three points. Penalties of one or two points can be given for injuring or endangering an opponent, while stepping out of bounds is punished by a one-point penalty.

Back to the top

While Greco-Roman wrestling only allows the use of the upper body, all freestyle holds can involve the legs in order to ultimately pin an opponent's shoulders to the mat. If a wrestler manages to do so, they win by fall.

Should neither competitor achieve that, the match continues until the end of the two three-minute periods. The winner is then decided according to the technical points scored with points awarded in the same fashion as Greco-Roman. A point can also be awarded to an attacking freestyle wrestler, though, should their opponent flee or refuse to start a hold.

Both men and women compete in freestyle events.

Back to the top