December 11 - Honav hosted a small pin promotion in John Lewis, Oxford Street yesterday. There was the chance to win a free Snowman or Snowflake pin on the roll of the dice. Wenlock and Mandeville were on site as part of a general London 2012 promotion and decided to stop by to try their luck.


In the end, Mandeville proved to be more successful than Wenlock, but both mascots enjoyed themselves.

A number of people stopped by to ask about London 2012 pins as well as choose their favourite mascot sport or pictogram pins. 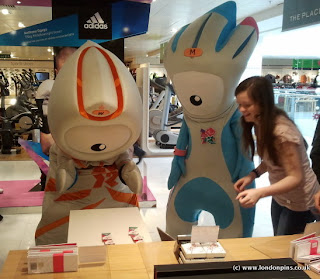 We also had the chance to meet an Olympic Gold medallist! A lady approached the pin displays and asked if there were any shooting pins. After showing her the Wenlock sports pin, we found out that she was Chiara Caneiro from Italy who won gold in Beijing at Women's skeet shooting.