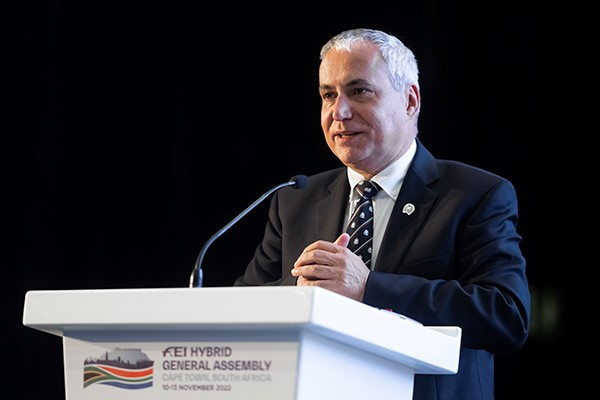 The Belgian, who has been an International Olympic Committee member since 2017, was running unopposed.

Due to run until 2026, this will be De Vos' third and last term in charge of the FEI.

There were four other candidates when De Vos was first elected in 2014, via a landslide victory, but his subsequent re-elections have both come unopposed.

"I am deeply honoured to have your trust and confidence to lead the FEI for one more term," De Vos said.

"Over the past eight years, I have had the privilege to witness the power of unity at work in our community, and it is this solidarity that brought us through some incredibly challenging times.

"We have moved forward together because we all put aside our differences for the wider benefit of our sport and community.

"We have come out stronger than ever as a result and I know that this foundation will serve us well for the future.

"And the future is very much on my mind as I now embark on my final term in office.

"I am determined to leave a strong legacy that my successor and the community can continue to build on in the years to come."

De Vos is on the IOC's Legal Affairs Commission, Gender Equality, Diversity and Inclusion Commission and the Coordination Commission for Los Angeles 2028.

In other activities at the General Assembly, Roly Owers, chief executive of the equine charity World Horse Welfare, spoke about what can be done to establish an even stronger horse-human relationship, and a fairer partnership, especially in horse sport.

Owers congratulated the FEI for making social licence a priority issue by establishing the Equine Ethics and Welfare Commission.

"The idea behind social licence is that we must be transparent, ethical and accountable for what we do," he said.

"We must do right by our horses - and be seen to be doing so.

"If we are not, we risk losing our social licence and face dwindling support, and potential intervention by outside regulation.

"We must remember that we are in our own equestrian bubble and the outside world sees us differently.

"Some practices they question may be good and perfectly justifiable, but we must be honest with ourselves that there are some practices in some parts of the horse world that are simply unacceptable but still tolerated.

"This has to change - and to move forward we have to be honest with ourselves, be open minded and, most importantly, look at ourselves through an outsider’s lens to help us see what the world sees.

"To build trust we must first understand what values society has regarding the use of horses in sport and then communicate to them in the context of those values.

"But we must make sure our communications reflect reality - ‘welfare washing’ will not work and only erodes trust."

In its second and final meeting today, the Board approved FEI Olympic Group Qualification Events for Paris 2024.

Jumping Group C - central and eastern Europe - will take place in Prague from July 27 to 30  and Group G - Southeast Asia and Oceania  - at Valkenswaard in The Netherlands on July 18.

Dressage Group C  will take place in Budapest, Pilisjászfalu from June 7 to 11.

Eventing Group C will be held at Baborowko in Poland from May 18 to 21.

With two outgoing members, the Board approved the election of Britain’s Jenny Hall and Samy Al-Duhamy  to the Executive Board for the term 2022 to 2026.

The Board also approved the appointment of Jumping athlete Jessica Kürten of Ireland to become chair of the FEI Athletes' Committee for four years.

FEI secretary general Sabrina Ibáñez presented the new Athletes' Committee, and the participation rate following the nomination and election process, where eligible athletes are invited to present themselves and vote for their representatives.

She expressed disappointment that the voting participation rate was low despite the fact the voting system had been simplified, the number of athletes eligible to vote increased and there was a significant communications push.

The FEI Sports Forum 2023 will be held in Lausanne from April 24 to 25 April and there will be a special celebration event for the FEI centenary on April 26.

Sessions for the FEI Sports Forum 2023 will include discussions on the report of the Equine Ethics and Wellbeing Commission, event organisation, FEI endurance rules revision, an update on the  Jumping Nations Cup and a progress report on Paris 2024 Olympic and Paralympic Games.