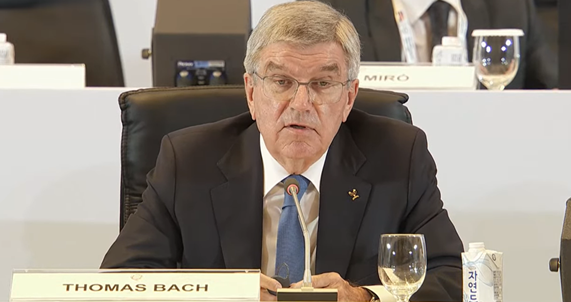 Bach made the most of his visit to the South Korean capital for the Association of National Olympic Committees (ANOC) General Assembly.

Gangwon 2024 is set to be held over two weeks from January 19 to February 2, in venues across the province in Pyeongchang, Gangneung, Jeongseon, and Hoengseong counties.

Approximately 1,900 athletes from 70 countries are set to take part in the Games which is hoped to continue the legacy of the Pyeongchang 2018 Winter Olympics, also in South Korea.

During his visit, Bach also helped to promote the event by taking photos with publicists and shouting the slogan of the Games, "Grow Together, Shine Forever", which was also emblazoned across a hoodie he was wearing.

Jeongseon was also recently confirmed as the site for the new Asian Olympic Academy.

It aims to increase the development of Olympic values throughout the continent with educational courses.

Gangwon 2024 is set to be the fifth edition of the Winter Youth Olympic Games following Innsbruck 2012, Lillehammer 2016, and Lausanne 2020.