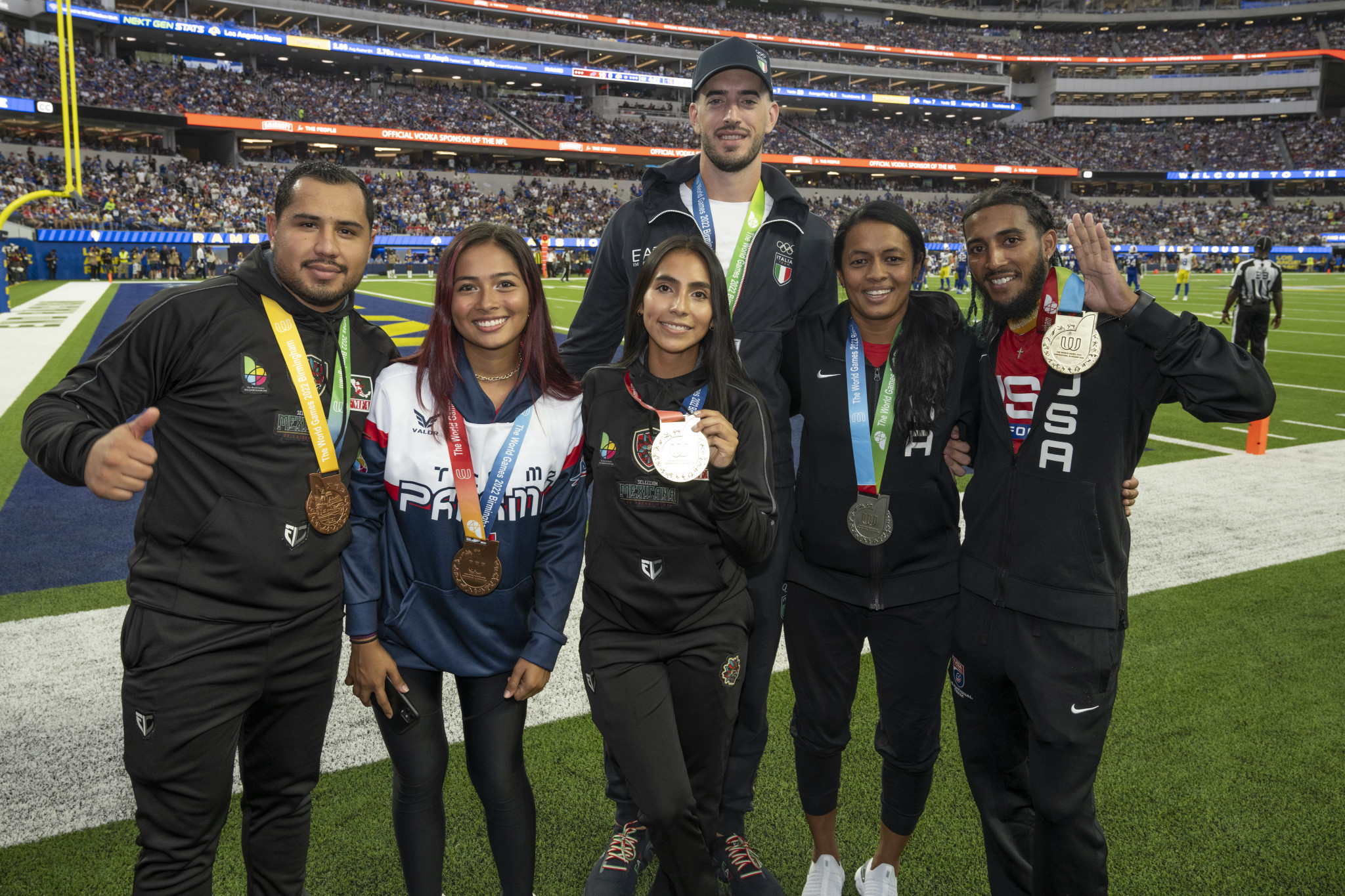 One player from each of the men's and women's teams that won medals at Birmingham 2022 were invited to SoFi Stadium to watch the Los Angeles Rams take on the Buffalo Bills, also being toasted on the field beforehand.

Mexico's women won the gold medal in Alabama and were represented by quarterback Diana Flores.

The moment was included on the NBC broadcast of the game in the US.

The six players have also been named global flag football ambassadors, joining the likes of Rams wide receiver Cooper Kupp and Dallas Cowboys quarterback Dak Prescott in having that distinction.

"It was a great honor to represent my country of Mexico and my sport of flag football at the NFL Kickoff at SoFi Stadium," Flores said.

"It was a very emotional moment for me and one I will not forget for a very long time."

Fellow quarterback Doucette said he was "absolutely blown away by the reception we received in LA and I want to thank IFAF and the NFL for making this happen".

The American is "extremely proud and happy" to be a global flag football ambassador and "can't wait to give back to the sport that I love and help it grow for the next generation coming through".

Donated by the IFAF, USA Football, NFL and the Rams, the equipment will be shared between schools in the Inglewood Unified School District to promote the development of flag football at the grassroots level.

The IFAF has applied for flag football to make its Olympic debut at Los Angeles 2028 and is one of nine International Federations on an Organising Committee shortlist to have their sport added.

SoFi Stadium, home to the Rams and fellow NFL side the Los Angles Chargers, is due to hold elements of the Olympic Opening and Closing Ceremonies come 2028.

"It was an incredible moment to see our international flag athletes celebrated during the NFL Kickoff game between the Rams and the Bills and we were delighted to collaborate with the NFL to make this happen," IFAF President Pierre Trochet said.

"This has already been a huge year for flag football; from its debut at The World Games, to the announcement of the biggest-ever cycle of international flag football competition, across all continents, starting next year, to the launch of the Global Flag Ambassador programme and our athletes being center-stage here in LA this week.

"We are committed to building on these key moments and driving forward flag’s future growth."