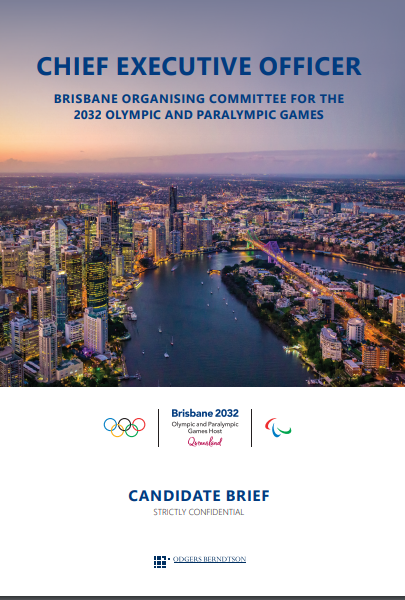 Brisbane 2032 have launched their recruitment campaign to  find a chief executive to lead its Olympic and Paralympic Organising Committee.

Head hunting specialists Odgers Berndtson have been put in charge of a global search for an individual with "confidence, credibility and gravitas".

A salary for the post has been not disclosed, but other details of the role have been outlined in an 18 page prospectus for applicants.

"Candidates with a deep understanding of Australia, its people, places and cultures will be well regarded," the document says.

Odgers Berndtson had earlier this year been appointed to find five independent directors, including the President.

Former Dow Chemical Company chief and chairman Andrew Liveris, who was identified to chair the Organising as part of that process, has written an introduction to the brochure seeking a chief executive.

"I’m looking for a results-oriented leader, who will ensure the principles of sustainability, inclusion and diversity are embedded in everything we do," Liveris said.

"I’m looking for someone visionary, that understands how to turn innovative ideas into a reality, that will revolutionise the visitor and spectator experience for mega-sporting events to come."

"I’m looking for the person that knows how to ensure Brisbane 2032 showcases our region, state and nation to the world."

Odgers Berndtson had previously been involved in recruiting key positions for the 2012 and 2016 Olympic and Paralympic Games in London and Rio de Janeiro, respectively.

Among the company's biggest successes was helping facilitate the appointment of London 2012 Paul Deighton, who oversaw one of the most successful Olympic and Paralympic Games in history.

The search will be led by Odgers Berndtson Troy de Haas, partner and head of the firm's sport and entertainment practice for Asia-Pacific.

The Melbourne-based De Haas is a former elite athlete he has represented Australia at the international level in mountain running and orienteering, where he became the first ever non-European to medal at the World Championship level, winning a bronze in the long race in 1999.

The candidate will take overall charge of financial accounting "to ensure a high standard of financial administration, propriety and regularity and ensure that public funds and assets are effectively and efficiently used and monitored," the job specification said.

Applicants have until Friday August 19 to apply and interviews for the post are expected to begin in October.

To read the full candidate brief and details on how to apply click here.