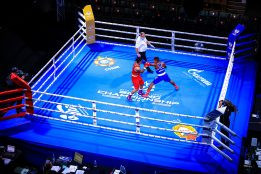 Brazilian Ferreira, defeated Kazakhstan's Aizhan Khojabekova by unanimous decision in the 60-kilogram class to set up a clash with Russian Nune Asatrian in the next round.

Palsteva won in a unanimous decision and will face Graziele Jesus de Sousa from Brazil, who beat Ehkhjargal Munguntsetseg of Mongolia, in the quarter-final.

However, there was a shock in the 91kg divisional Brazilian favourite Abner Teixeira was surprisingly beaten by Moh Said Hamani from Algeria.

The last fight of the day of the 58th WMC Boxing in Moscow, Russia, ended with a great knockout by Algerian boxer Teixeira da Silva Júnior Abner (91kg) !@AIBA_Boxing https://t.co/Sv1jJ0XmAr via @FacebookWatch

Hamani will face Ivan Sagaidak from Russia in the next round after he earned a unanimous decision victory over Mahmood Hassan from Pakistan.

In total, 231 boxers from 36 countries in 10 weight categories for men and five for women will compete at the Championships, which are the 58th to take place.

The finals are due to take place on September 25.