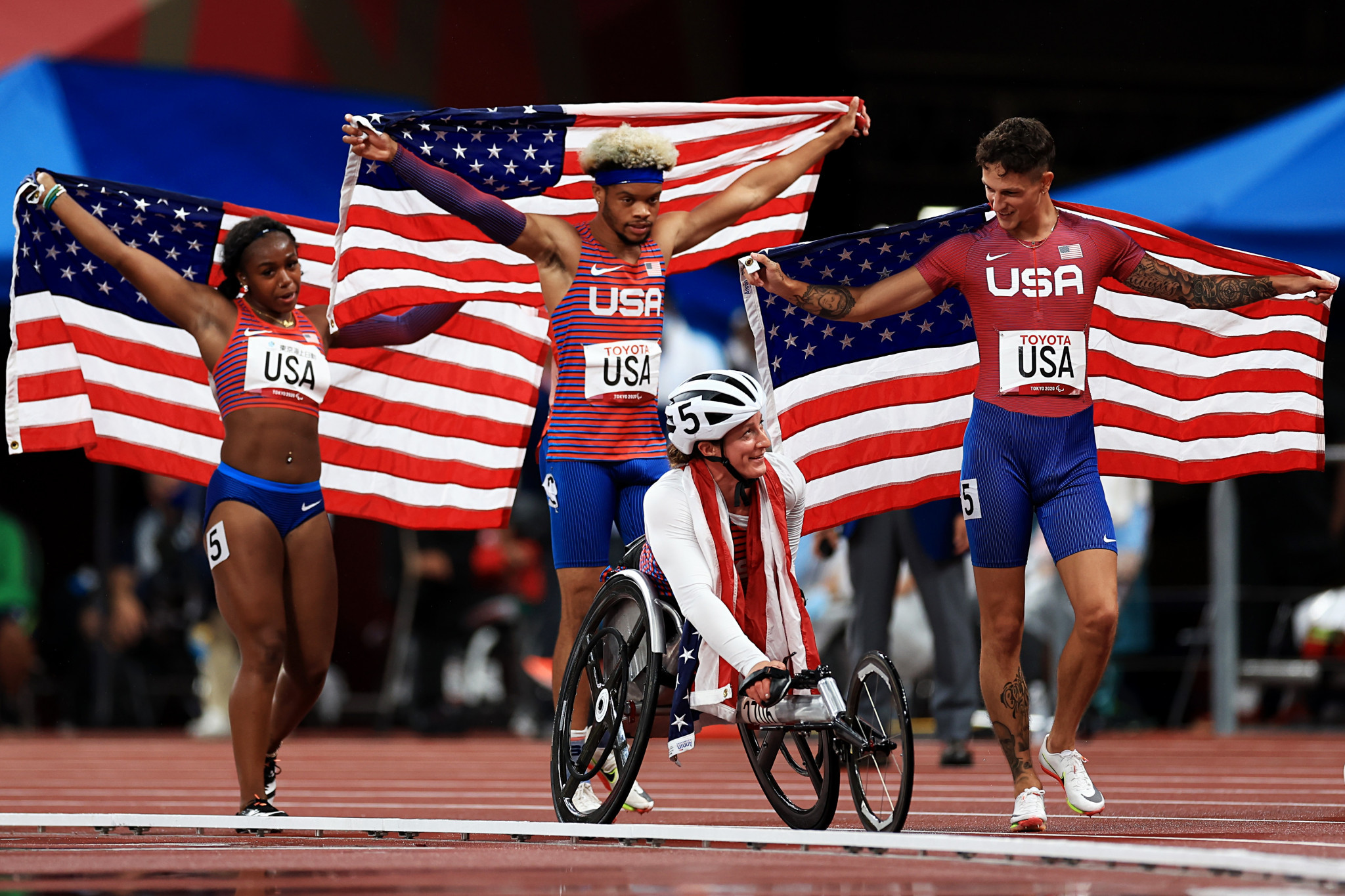 The United States made history by becoming the first-ever nation to win Paralympic gold in the 4x100 metres universal relay here in Tokyo.

The new discipline added to the Paralympic programme for Tokyo 2020 sees athletes from different classes come together to compete.

Visually-impaired athlete Noah Malone sent the Americans on their way before passing to Brittni Mason who suffers from a neuromuscular condition that affects her left shoulder and arm.

Nick Mayhugh, who has a mild form of cerebral palsy, collected the baton from Mason as the US team established an unassailable lead.

It was then left to wheelchair racer Tatyana McFadden, who is paralysed from the waist down, to complete the victory in a world-record time of 45.52sec.

"I was really happy to be chosen.

"Nick and I had really good exchange practices.

"I am happy to get to my 20th medal, my eighth gold medal so far.

"It's been really amazing and I wouldn't want to do it with any other team.

"It's a really special team.

"It is something that I will always remember.

China had finished second behind the US only to be disqualified, allowing Britain to clinch silver in 47.50 and Japan to move into third in 47.98.

There was a changing of the guard in the men's T61 200m as 19-year-old Ntando Mahlangu of South Africa beat 45-year-old Richard Whitehead of Britain.

Whitehead was looking to win the title for the third straight Games and was leading going around the bend.

But Mahlangu, who has already achieved long jump T63 gold in Japan, proved to strong for Whitehead 23.59.

Johannes Floors of Germany has won his first individual Paralympic title after producing a dominant display to win in the men's T62 400m.

The German timed his race to perfection, coming home in a season’s best of 45.85.

Olivier Hendriks of The Netherlands crossed in 47.95 ahead of Hunter Woodhall of the US who finished in 48.61.

European champion Marlene van Gansewinkel of The Netherlands came from behind to win the women's T64 100m title in a Paralympic record of 12.78.

Germany’s Irmgard Bensusan finished in 12.89 with Canada's Marissa Papaconstantinou relegating Fleur Jong of The Netherlands into fourth spot after finishing in 13.07.

Belgium's Peter Genyn underlined his dominance in the men's T51 100m with victory in a Paralympic record of 20.33.

Roger Habsch tried to make it a Belgian one-two but Finland's Toni Piispanen split them up as he finished in 20.68 to take silver.

The bronze medal went to Habsch who finished in 20.76.

The 29-year-old, who finished sixth at the 2019 World Championships, crossed the finish line in a winning time of 3min 54:57sec.

American Raymond Martin claimed the men's T52 100m title in a time of 16.99sec to win his seventh gold medal at his third Paralympic Games.

Rebeca Valenzuela Alvarez of Mexico took the bronze medal with 13.72.

New Zealand's Anna Grimaldi has a best mark of 5.76m for a new Paralympic record and the gold medal in the women's T47 long jump.

The RPC's Aleksandra Moguchaia was just nine centimetres behind for silver; Kiara Rodriguez of Ecuador was another four back for a new South American record and the bronze medal.

Britain's Jonathan Broom-Edwards went one better than he did at Rio 2016, winning the gold medal at Tokyo 2020 in the men's T64 high jump.

He cleared 2.10m with a second jump to beat India's Praveen Kumar for the gold medal.

Iran's Hamed Amiri added a Paralympic title to his two world gold medals in the men's F54 javelin, breaking the Games record with a best of 31.35m.

RPC athlete Aleksei Kuznetsov was 16 centimetres behind for silver and a new European record; while Justin Phongsavanh of the US was another 10 back for bronze.

Ovsii, a bronze medallist in the women's F53 discus, reached 25.12m with her penultimate throw to break the Paralympic record.

Cassie Mitchell of the US claimed silver with 24.18m while Elena Gorlova of RPC produced a personal best of 24.08m to clinch bronze.

The Brazilian took the lead with a throw of 14.77m before breaking the Paralympic record when he reached 15.10m - beating the previous best of 14.42m set by Wu Guoshan of China at Rio 2016.

Reigning champion Wu had to settle for silver after producing a throw of 15.00m.

Marco Aurelio Borges of Brazil sealed bronze with a personal best of 14.85m.

New Zealand's Holly Robinson improved her silver medal won at Rio 2016 to gold with victory in the women's F46 javelin.

Noëlle Roorda of The Netherlands secured silver with a personal best of 40.06m.

The London 2012 gold medallist won the title with a leap of 6.03m - three centimetres further than her previous best set at the Games nine years ago.