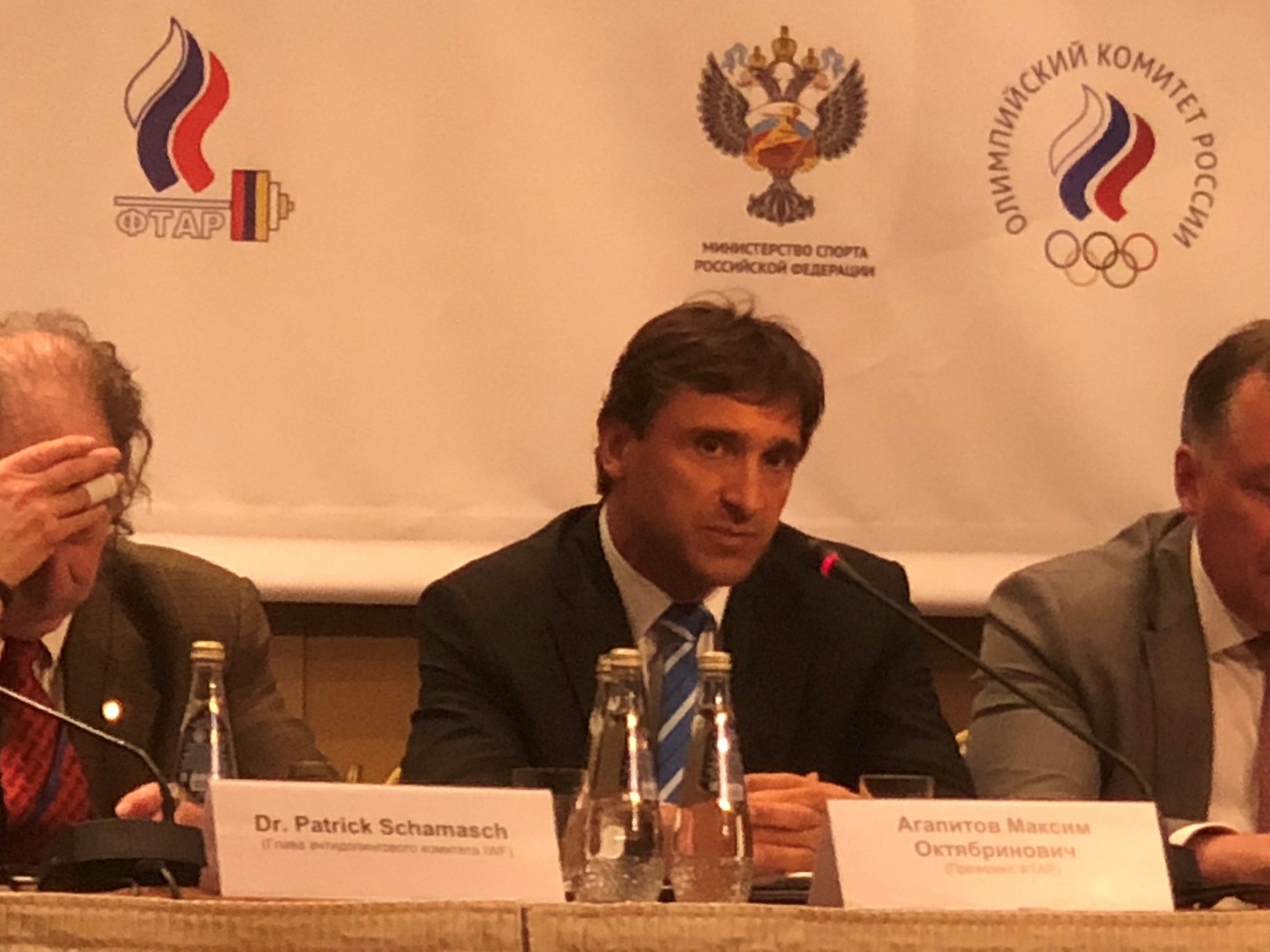 Weightlifting’s warring factions are involved in a dispute that could end in legal action concerning the Acting President of the European Weightlifting Federation (EWF), Maxim Agapitov.

Agapitov, from Russia, who also sits on the Executive Board of the International Weightlifting Federation (IWF), used official EWF channels to make a personal attack against a director of British Weight Lifting (BWL) in which he also made allegations about Attila Adamfi, the IWF’s former director general from Hungary.

Agapitov published an "open letter" on the EWF website accusing Matthew Curtain and BWL of "bringing weightlifting into disrepute" by forming an alliance with Adamfi who, he said, was "not a member of the weightlifting family."

He also claimed that Adamfi "was implicated, or repeatedly mentioned in a negative context" in Prof Richard McLaren's report into corruption in weightlifting last year, which Adamfi strongly denied.

Adamfi said he had presented evidence to the contrary to the IWF Board last year, and he added the details to his response, which was copied to all Board members of both the IWF and EWF.

Curtain and Ashley Metcalfe, chief executive of BWL, rebuffed Agapitov’s claims and said "we also reserve our right to consider action to the IWF Ethics and Disciplinary Commission and other legal avenues regarding the extremely unfortunate nature of Mr Agapitov’s letter."

Adamfi wrote to Agapitov saying: "I request you to provide the evidence for your potentially defamatory statements referring to me, especially in connection with the McLaren Report."

He asked that the letter be removed from the EWF website immediately - it was there this morning but has now gone - and added: "Failing to meet my above requests, I reserve my right to take further action(s), including but not limited to legal action(s)."

Vice-presidents and members of the EWF Executive Board distanced themselves from Agapitov’s comments, including those from Georgia, Denmark and Cyprus.

Agapitov wrote as Acting President of the EWF, under the EWF letterhead, and used the term "we" throughout his letter but the EWF’s general secretary Milan Mihajlovic later wrote to members to state that the views were personal, not those of the Board.

The letter concerned a recent communication, jointly signed by Curtain and Adamfi, to Darren Kane, the Australian lawyer who chairs the IWF Reform and Governance Commission.

They complained that the current Constitution, as proposed by the IWF Board, was "not only weakening the eligibility criteria (for IWF Board members) but perhaps more alarmingly is an attempt to clearly serve self-interest and protect current EB members."

They also said that any Board members who voted in favour of the proposed Constitution as members of the Reform and Governance Commission had a clear conflict of interest - including Agapitov and the Australian Sam Coffa, 85.

Curtain and Adamfi were both nominated for IWF roles earlier this year in the elections, which were subsequently postponed to a date yet to be announced, and have openly campaigned for governance reforms including strong eligibility criteria, as requested by the International Olympic Committee (IOC).

They also led the development of the Tokyo 2020 qualification system, praised by the IOC President Thomas Bach, which punished nations with poor doping records by reducing their athlete quota.

Russia was allowed to send only one male and one female athlete to Tokyo, as were several other nations that had amassed 20 or more doping violations since the Beijing 2008 Olympic Games.

Kane believes weightlifting will be suspended from the Olympic Games if the IWF adopts a new Constitution which is "too weak" to satisfy conditions for reform outlined by the IOC.

The "old guard" of IWF Board members have been accused of putting their own interests ahead of the sport’s in backing the current version of the Constitution, which would help certain individuals - including Agapitov, Coffa and the IWF Interim President Mike Irani - to overcome potential eligibility problems.

Agapitov, 51, served a two-year doping suspension in 1994 and feels it would be grossly unfair if he is punished again 27 years later by being unable to sit on the IWF Board, which would be the case if Kane’s original version of the Constitution was voted through at next week’s Congress.

That original version also featured an age limit of 70 for election candidates.

On the opening day of the Tokyo 2020 Olympic Games Agapitov won a legal challenge against the IOC, which had withdrawn his accreditation, by arguing that he had played a key role in exposing past corruption in weightlifting.

The IOC reacted, as the Games ended, by amending the Olympic Charter to give it the full and final say on who should or should not be accredited, and making other changes specifically to deal with weightlifting.

The IOC has repeatedly criticised the IWF for poor governance and has said weightlifting’s future is under threat unless it reforms under "a new culture and leadership."

In his open letter, Agapitov suggested that Curtain had sent confidential Constitution documents to Adamfi, "who is not currently a member of the weightlifting family, still less he holds any position within the IWF or any other weightlifting organisation to our knowledge."

This is despite the public knowledge, including at the June 30 2021 Congress, that Adamfi is the voting delegate for the Hungarian Weightlifting Federation.

Agapitov pointed out that Adamfi is the son in law of Tamás Aján, who was forced to resign last year after 44 years of leadership at the IWF, and told Curtain: "In our opinion, such an alliance totally undermines the confidence of the weightlifting family in you personally and - what is even worse! - in British Weightlifting, which you represent, in general."

Curtain wrote back to say that neither he nor British Weight Lifting had provided any draft Constitution documents to Adamfi.

He and Metcalfe said their only interest was is in supporting "comprehensive governance reform" to help keep weightlifting on the programme of the Olympic Games.

Adamfi said he was "shocked and disappointed" to read the EWF letter on its website.

"Considering the fact that the EWF… is not a legal party in the IWF Constitution reform process, it is not clear for me why the EWF considered it is necessary to challenge anything in that process."

He said that as Hungary’s voting delegate he had "the same right to receive any draft of the IWF Constitution that has been circulated among the members on a confidential basis" as any other member.

"Please clarify why is a draft Constitution confidential. Is there anything to hide?"

Adamfi said the letter seriously harmed his reputation and that he had "highlighted, and demonstrated with clear evidence" to the IWF Board that the McLaren Report "does not include any specific accusations against me, does not present any evidence against me, and tries to misrepresent me."

"I intentionally removed them from my correspondence as I believe sending such letters to them is highly damaging to the reputation of our sport.

"I am sad this letter was published - so I had to respond - as I truly believe the focus should be to save our sport, as our sport shall be always more important than individuals."

Agapitov told insidethegames that he had sent the letter to Curtain as "a personal initiative … I did it to protect weightlifting with great support of many federations, coaches and athletes.

"Unfortunately not everyone in the EWF is ready to get rid of our past and take the proactive approach necessary to show the IOC and sports community our commitment."

He became Acting President of the EWF, and Russia’s first leader of the federation, when its President, Hasan Akkus of Turkey, "stepped aside" after being charged with an historic doping violation concerning an alleged cover-up of positive tests.

The EWF leadership position is due to be reviewed by the Board, depending on any further developments regarding Akkus, at the end of September.