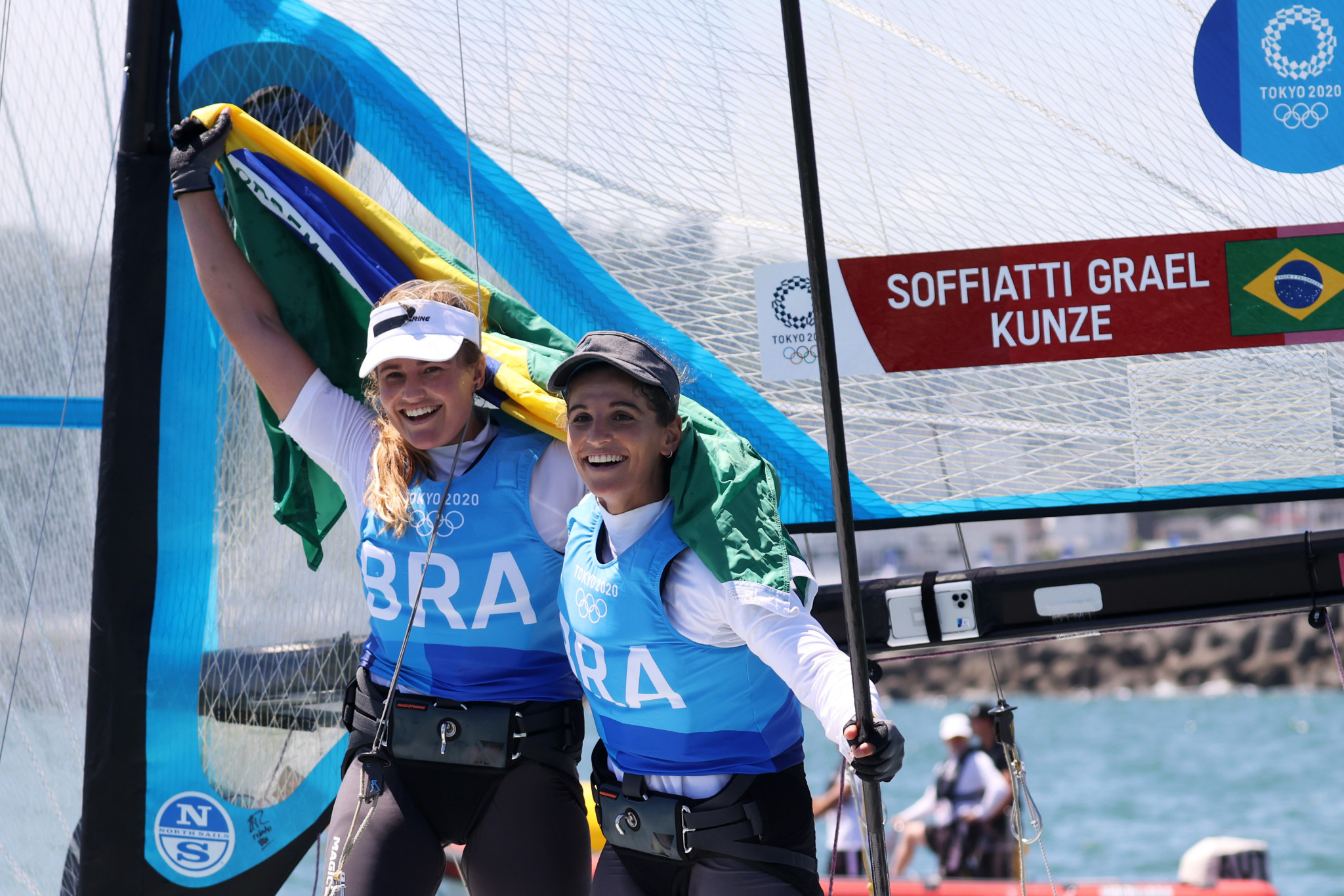 Both boats tasted success 24 hours later than planned after a lack of wind at Enoshima Yacht Harbour yesterday caused a postponement of all racing.

Grael and Kunze went into today's medal race tied for the lead with Dutch duo Annemiek Bekkering and Annette Duetz, but finished third to claim top spot for themselves on 76 points.

The Dutch pair could only finish ninth out of 10 boats to end on 88 points, which pushed them down to bronze.

They were leapfrogged by Germany's Tina Lutz and Susann Beucke, who started the day three points off the lead and came home fifth to end on 83 points.

Brazil's pair struggled to find a lane at the start but the host nation's heroes from Rio found a gap next to the committee boat with 10 seconds left.

They tacked out to the right with the rest of the fleet staying left.

At one point the Dutch boat was last and out of the medals, but Bekkering and Duetz pulled back two spots to get in front of Spain's Tamara Echegoyen and Paula Barcelo and confirm bronze.

"This week was a big challenge to come all the way from behind and move up the fleet, with some results that were not so good," said Grael.

"Every single point was very tough.

"We lost a few points during the week, so we knew it would be very important today on the final day.

"Today we had such a small margin of points compared to the other boats, and so it was really nice to have a free lane to be able to do our race and go fast."

Fletcher and Bithell started the day eight points behind New Zealand's defending champions Peter Burling and Blair Tuke but won the medal race to move in front of the Kiwis and claim a stunning victory.

Both boats finished on 58 points after the New Zealanders finished third today - but gold went to Britain by account of their medal race victory.

The ending could not have been closer as Britain crossed the line only a fraction in front of Germany's fast-finishing Erik Heil and Thomas Ploessel.

The Germans, watched by their compatriot and International Olympic Committee President Thomas Bach, won bronze on 70 points and would have handed the gold to New Zealand had they finished first.

"I think both of us, as soon as we crossed the line, it was a double check of 'that was definitely us, yeah?'

"Hopefully it was a great race for the fans.

"It's all the emotion, what it means to us there.

"Sometimes the gold medal is won on a fine margin, so hopefully that was enjoyable for the fans.

Scott led going into the final race but thought he had crossed the line too early and returned to re-start.

He later learned that he had been clear, and did not need to have gone back.

His error led to Hungary's Zsombor Berecz moving into gold medal position but Scott worked his way through the field to finish fourth.

That was enough for overall victory on 36 points as Berecz, the medal race winner, earned silver on 39.

Bronze went to Joan Cardona Mendez of Spain on 51.

Britain have now won the finn title for the past six Olympic Games in a row.

"The emotions of today couldn’t be more different from Rio five years ago," said Scott.

"Then I could have a nice meal the night before and just enjoy sailing around the course.

"Today was the polar opposite, I think I've aged a bit after that race."

In the Nacra 17, Italians Ruggero Tita and Caterina Banti held a 12 point lead over Britain's John Gimson and Anna Burnet going into the medal race, and duly did enough for gold.

They only finished sixth but both of the top two endured a tricky start and the British pair only ended fifth.

That left the Italians on 35, with Gimson and Burnet taking silver on 45 and Germany's Paul Kohlhoff and Alicia Stuhlemmer taking bronze on 63.

"It's obviously pretty unreal because halfway through the race it looked pretty bad for us," said Tita.

"We just managed to come back somehow, we found one or two lucky shifts, and the others didn't have a good enough race to beat us in the end.

"But it was a big fight, and the result needs to sink in."