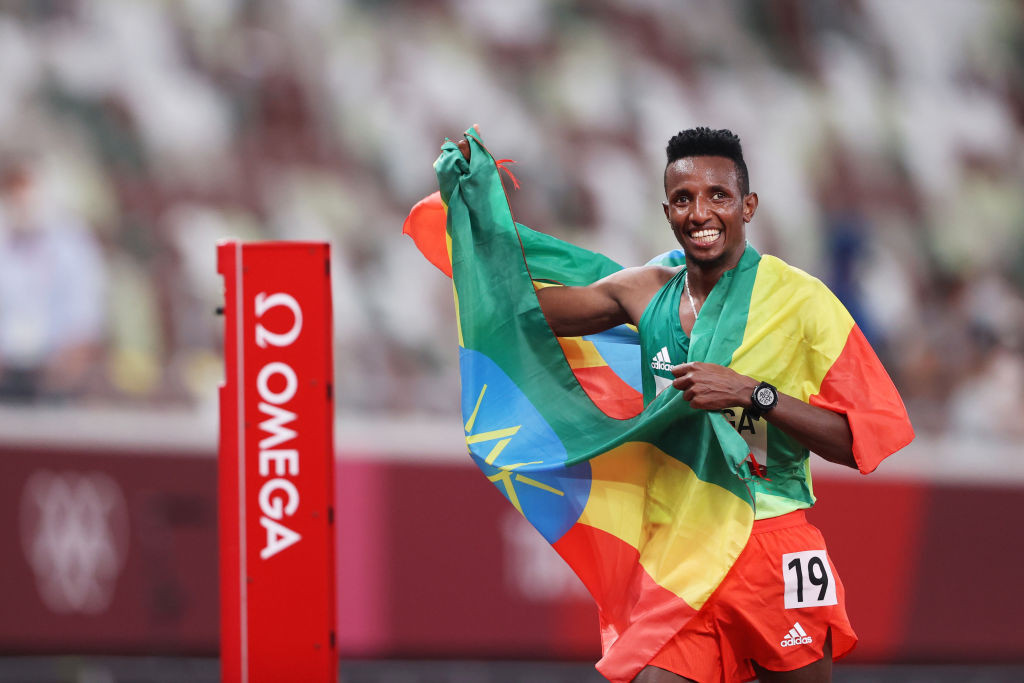 After earning world 5,000m silver in Doha two years ago, Barega now finds himself at the summit of his event.

The 21-year-old won gold in an edgy and tactical race, with a burst of speed around the final bend and down the home straight that not even the fleet Ugandans could gainsay.

In conditions of steamy humidity, Barega clocked 27min 43.22sec, with Cheptegei, who set a world record of 26:11.00 in Valencia last year, outsprinting his young rival over the final 30 metres to take silver in 27:43.63.

Afterwards, Barega acknowledged that he was restoring Ethiopia's status in an event last won by Kenenisa Bekele in 2008, adding that his strategy had been "really challenging" given the form of the Ugandans.

"I was not worried at all even though they (Ugandans) were winners before and even though they were really coming near, I was more expecting my colleagues from Ethiopia to be part of the top winners.

"On the first straight, there was a very huge gap between the first Ugandan runner and the other one, so it was really competitive, but they were able to communicate with each other because they were training with themselves."

Asked whether he will now try to double up over 5,000m, he responded: "I’m very ready to run but I’m not sure about what the Olympics and the Federation will say, but if they allow me, I am really ready to compete.

"I’m also very hopeful to achieve more in this Olympics if it’s possible, and even in the future, I want to achieve a history like my previous colleagues."

Over the majority of the opening 7,000 metres, the leader – at one point by around 50 metres – was Uganda’s Stephen Kissa, who was eventually caught and dropped out after a few meaningful glances back at his colleagues.

That it was indeed a planned move became clear afterwards as Kissa explained rather disconsolately: "It was a sacrifice for the team.

"We had a plan for me to go ahead to make it a fast race.

"I thought they were going to follow me but when I looked round they were not there.

"My teammates stayed behind, they couldn't do it.

"We were planning for the gold but unfortunately we have a silver and bronze.

"But I'm happy, we have two medals.

"Maybe next time someone else will sacrifice themselves for me."

Kiplimo commented afterwards that he and Cheptegei had not followed the pace as it was "too hot, too humid."

Cheptegei said: "I have two feelings.

"One is that I'm very happy to have won an Olympic silver medal today and I would say that this is really special for me as a world record holder and as a world champion.

"But the other side of me is really not satisfied with the result because I came here expecting to win gold.

"My plan was just to see the last three laps or the last 2K (2000m) and try to push, but still I was not really feeling comfortable with my tendon, and I was just saying that maybe I need to consider health first rather than to break myself and go out for a long time."

Cheptegei had led briefly around the 8,000m mark with Canada's Mohammed Ahmed and Kenya's Rhonex Kipruto, who had led himself for a couple of laps, in attendance.

But as Ahmed pushed on it was Barega, who had earlier brought the field back to Kissa, who was on his shoulder, looking supremely composed.

Barega took the lead at the bell, which was heard clearly in this vast and largely untenanted stadium, and never looked back.

There was no progression for Burundi's Rio 2016 800m silver medallist Francine Niyonsaba, who had to move up in distance after the World Athletics ruling on Differences of Sexual Development athletes between the distances of 400 and 1500m.

She was disqualified after stepping onto the infield.

The heats of the inaugural 4x400m mixed relay, introduced to the Olympics to help with gender equality and also, according to some, to add a "fun" element to the Games, proved unfunny for both the Dominican Republic and United States quartets, who were both disqualified.

Eight teams qualified for the final, including Poland, who crossed the line in a European record of 3m 10.44s.

Earlier in the day, the women's 100m heats produced a series of super-fast times that promise something spectacular for tomorrow night's final.

Six women bettered 11 seconds, topped by Marie-Jose Ta-Lou of the Ivory Coast, who equalled the African record of 10.78s.

Karsten Warholm, the world record-holder and two-time world champion in the men’s 400m hurdles, opened his bid for a first Olympic title by winning his heat easily to advance to the semi-finals.