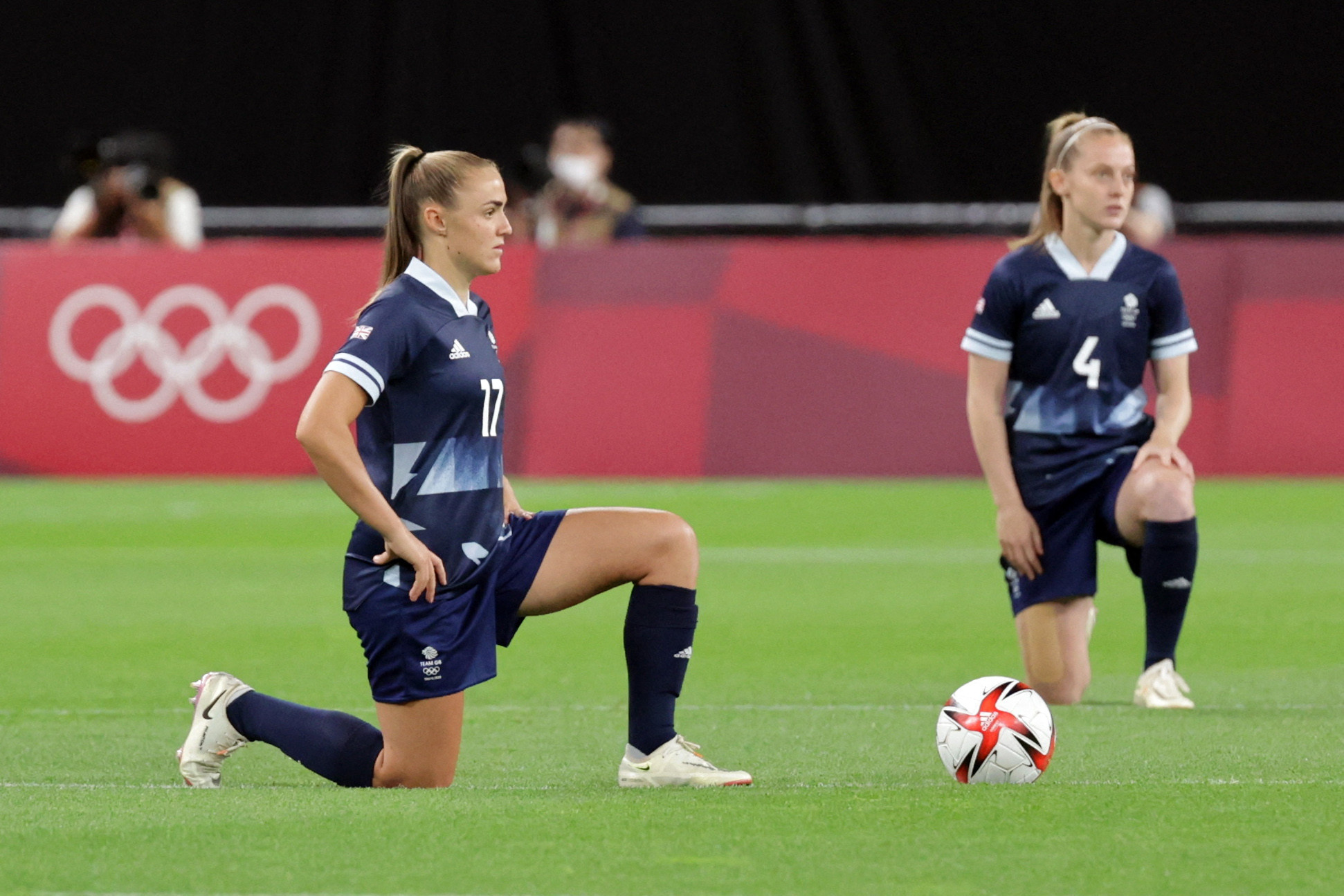 Women's football teams took the knee today in the first examples of protest at the Olympic Games after a relaxation of the rules.

Britain, Chile, Sweden, New Zealand and the United States all performed the gesture before kick-off in their matches at Tokyo 2020.

It comes after the International Olympic Committee rolled back Rule 50, which stated that "no kind of demonstration or political, religious or racial propaganda is permitted in any Olympic sites, venues or other areas".

Athletes can now demonstrate at specific times and in certain areas before their competition at the Games - such as taking a knee.

On the pitch, Sweden ended the 44-match unbeaten streak of the US with a 3-0 victory here that few would have predicted.

The Americans were hoping to gain revenge on Sweden after they knocked them out of Rio 2016 on penalties at the quarter-final stage.

Back then, US keeper Hope Solo described the Swedish team as a "bunch of cowards" after a defensive display - a remark which saw her handed a six-month ban by US Soccer - but the Scandinavians launched wave after wave of attacks this time.

Sweden, ranked fifth in the world, were much the better side in the first half and Stina Blackstenius put them in front with a glancing header after 25 minutes.

Other chances to extend the lead by the break were spurned but Blackstenius doubled the advantage after 54 minutes, smashing into the roof of the net after a header struck the post.

Substitute Lina Hurtig headed in the third on 72 minutes with the world champions and four-time Olympic gold medallists not at the races.

"The team helped me very much and I think I could have scored at least two more but I don't want to focus on that.

"Just happy and proud of the team."

Tameka Yallop's strong finish and a header from Sam Kerr put Australia in control in the first half, and Gabi Rennie's stoppage-time goal was just a consolation for the Kiwis.

The Australian team posed for a photograph with the Aboriginal flag before kick-off - in another example of the relaxation of Rule 50.

Britain got their campaign off to a good start with a 2-0 win over Chile at the Sapporo Dome, with Ellen White scoring both goals in the Group E encounter.

At the same venue, hosts Japan fought back to draw 1-1 with Canada who had taken the lead through international goals record holder Christine Sinclair, who bagged her 187th strike while becoming only the fourth player to reach 300 caps.

Mana Iwabuchi levelled for the home side six minutes from time, with Canadian goalkeeper Stephanie Labbe also saving a penalty.

In Group F, Brazil thrashed China 5-0 at Miyagi Stadium with their legendary player Marta grabbing two goals and becoming the first player to score at five Olympics in a row.

Debinha, Beatriz and an Andressa penalty completed the scoring, with 43-year-old defender Formiga playing as she appears at a seventh Games.

The Netherlands then proved to be far too strong for Zambia in a barmy contest, registering a dominant 10-3 win which included four goals from Vivianne Miedema.

Barbra Banda scored a hat-trick for the Zambians but a double from Lieke Martens and goals from Jill Roord, Shanice van de Sanden, Victoria Pelova and Lineth Beerensteyn saw the Dutch well clear.