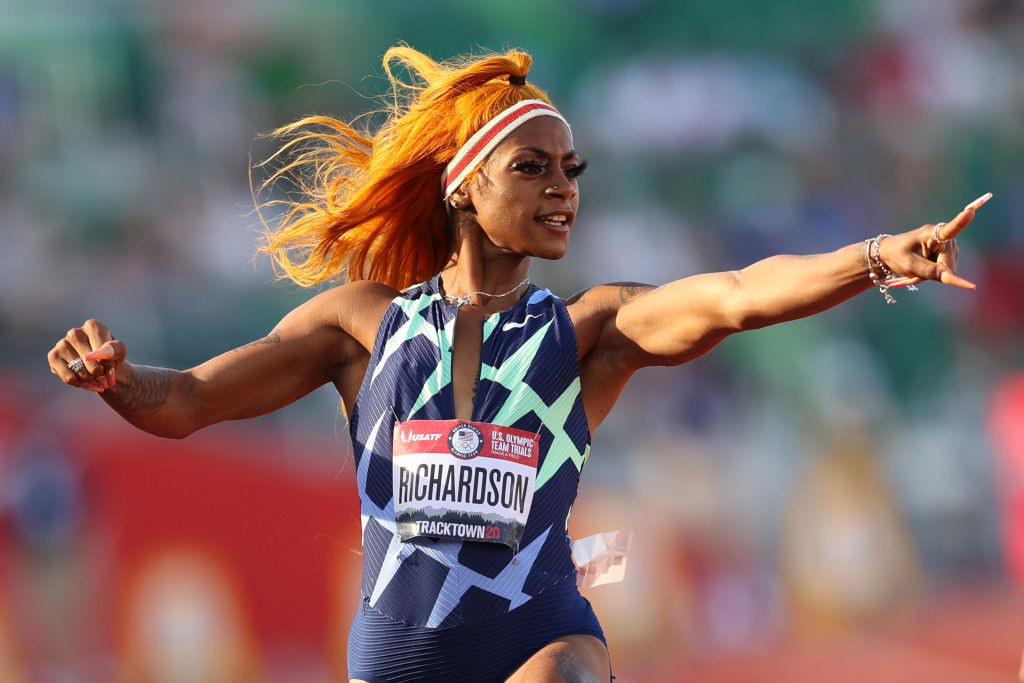 Sha’Carri Richardson will not run in the women’s 100 metres at the delayed Olympic Games in Tokyo after accepting a one-month ban from June 28 following a positive test for marijuana on June 19 - the day she won the event at the United States Olympic Team trials in Eugene, Oregon.

The women’s 100m event starts on July 30, two days after Richardson’s minimum ban ends, but the adverse finding means her Olympic qualifying results at the trials, which offer places only to the first three qualified athletes in each event, are annulled.

It is unclear whether the 21-year-old from Texas might yet be selected for the 4x100m relay event, where the US team is composed of the first four at the trials plus two discretionary picks.

Richardson's eligibility - should she want to pursue the option - would have to be determined by the United States Olympic and Paralympic Committee and USA Track & Field.

Richardson told NBC’s Today show that she had ingested marijuana after learning from a reporter that her biological mother had died.

She was in Oregon, where marijuana is legal.

"I know what I did, I know what I'm supposed to do...and I still made that decision," Richardson said.

"I'm not making an excuse or looking for empathy in my case.

"However, being in that position in my life, finding out something like that...dealing with the relationship I have with my mother, that definitely was a very heavy topic on me."

The United States Anti-Doping Agency (USADA) announced that Richardson had "accepted a one-month suspension - as permitted under the applicable international rules - for an anti-doping rule violation for testing positive for a substance of abuse".

USADA chief executive Travis Tygart said: "The rules are clear, but this is heart-breaking on many levels; hopefully, her acceptance of responsibility and apology will be an important example to us all that we can successfully overcome our regrettable decisions, despite the costly consequences of this one to her."

USADA reiterated the rules on cannabis in a statement confirming her one-month suspension.

"The 2021 World Anti-Doping Code newly classifies THC as a ‘Substance of Abuse’ because it is frequently used in society outside the context of sport," USADA said.

"If an athlete who tests positive for a substance of abuse establishes that their use of the substance occurred out of competition and was unrelated to sport performance, the athlete will receive a three-month sanction.

"However, if the athlete satisfactorily completes a Substance of Abuse treatment program approved by USADA, the sanction may be further reduced to one month.

"In this case, Richardson accepted a one-month period of ineligibility that began on June 28, 2021, the date of her provisional suspension.

“Richardson’s period of ineligibility was reduced to one month because her use of cannabis occurred out of competition and was unrelated to sport performance, and because she successfully completed a counselling program regarding her use of cannabis."

In a cryptic tweet earlier in the day, Richardson wrote: "I am human."

The USTAF said: "Sha’Carri Richardson’s situation is incredibly unfortunate and devastating for everyone concerned.

"Athlete health and well-being continue to be one of USATF’s most critical priorities and we will work with Sha’Carri to ensure she has ample resources to overcome any mental health challenges now and in the future."

Jamaica’s Gleaner newspaper was the first to report the story, saying Richardson, who is second in this year’s world 100m rankings with 10.72sec, tested positive for an unspecified prohibited substance.