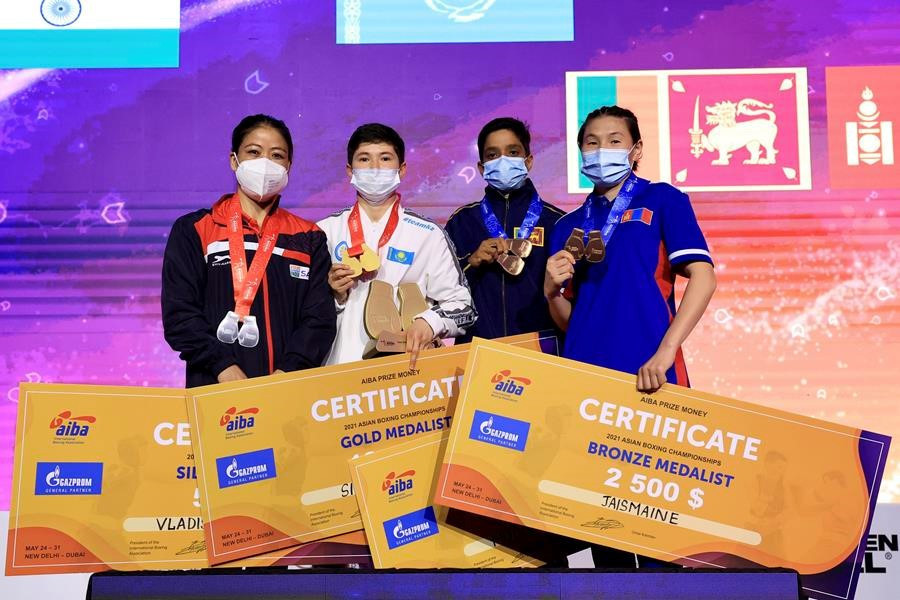 Kazakhstan claimed eight gold medals in the women’s finals on the penultimate day of the Asian Elite Boxing Championships in Dubai.

The country’s first win came in the opening final of the night, the light-flyweight, as second seed Alua Balkibekova won on points 4-1 against Gulasal Sultonalieva of Uzbekistan.

Bronze medals in the category went to top seed Josie Gabuco of the Philippines and Monika of India.

There was a big surprise in the flyweight final as Nazym Kyzaibay beat top seed Mery Kom of India, winning on points 3-2 to deny Kom her sixth Asian Championship title.

The bronze medals went to Nadeeka Pushpakumari of Sri Lanka and Lutsaikhan Altantsetseg of Mongolia.

In the bantamweight final top seed Dina Zholaman won on points 3-2 against Sitora Shogdarova of Uzbekistan.

Bronze medals in the division went to Sakshi of India and Mongolia’s Erdenedalai Michidmaa.

In the lightweight category Rimma Volossenko defeated Huswatun Hasanah of Indonesia by first round knockout, with a series of lethal early punches leading to the contest being ended prematurely.

Bronze medallists in the category were top seed Shoira Zulkaynarova of Tajikistan and Simranjit Kaur Baatth of India.

In the light welterweight category Milana Safronova claimed a narrow points win 3-2 against Lalbuatsaihi of India.

In the welterweight category Valentina Khalzova was a unanimous 5-0 points victor against Navbakhor Khamidova of Uzbekistan.

There was only one bronze medallist in this category - Lovlina Borgohain of India.

Saweety of India was the sole bronze medallist in this division.

In the heavyweight category Lazzat Kungeibayeva was a 3-2 points winner against Anupama of India.

Bronze medals went to Hanan Alzeyouidi of the United Arab Emirates and Mokhira Abdullaeva of Uzbekistan.

Sitora Turdibekova of Uzbekistan secured her country’s second ever medal at the Asian Championships in the featherweight category with a unanimous 5-0 points win over Vladislava Kukhta of Kazakhstan.

The bronze medals in this category went to Mijgona Samadova of Tajikistan and Jaismine of India.

In the middleweight category Pooja Rani of India was a unanimous 5-0 points winner over Mavluda Movlonova of Uzbekistan, claiming her second Asian Championships title following a win in the middleweight division at Bangkok in 2019.

The bronze medallists in this category were Munkhbat Myagmarjargal of Mongolia and Marina Volnova of Kazakhstan.

The men’s finals are scheduled to round off action at the Le Meridien Hotel tomorrow.