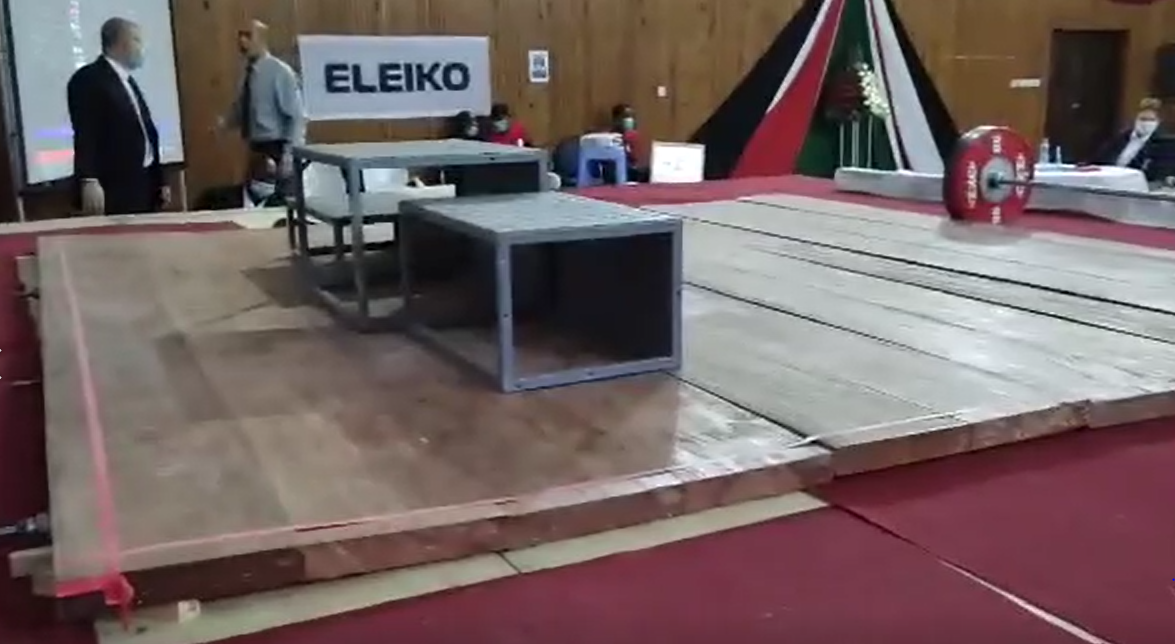 Athletes at the African Weightlifting Championships in Nairobi, Kenya say the organisation and training conditions are the worst they have seen and that the event has been "shameful" for the sport.

In a series of videos sent to insidethegames by athletes, a World Championship medallist from Algeria can be seen training on a rickety makeshift platform in a parking garage while a vehicle drives over a disc a few metres away from him.

The car park has remained in use while athletes have been training in preparation for a final attempt to gain crucial qualifying points for the Tokyo 2020 Olympic Games.

The competition platform was deemed unstable by some athletes, and the bar loaders were so inexperienced they had to be told by the referee how to do their job while athletes waited for their next lift.

Khaled Mehalhel, President of the Weightlifting Federation of Africa (WFA), said the training venue was moved and the competition platform had been firmly fixed after complaints.

He insisted the WFA was right to go ahead with the Championships despite difficult circumstances after three earlier postponements during the coronavirus pandemic.

"The number of delegations here shows the answer," he told insidethegames.

"The federations wanted the Championships."

Karem ben Hnia, the Tunisian who competed at Rio 2016 and whose 11th continental title in Nairobi should put him in the top eight places for Tokyo, told a Kenyan interviewer, "All of Africa should feel shame to do a competition like that."

He said he had never before lifted on a platform that moved beneath his feet.

Clementine Meukeugni of Cameroon, who lifts today in the women's 87 kilograms category, has been competing around the world for nine years.

"Of all the events I have competed in, this is the worst," she told insidethegames from Nairobi.

The Championships were arranged at desperately short notice after plans for Mauritius and Madagascar to host the event were dropped.

The WFA, which held its Congress and elections in Nairobi earlier this week, gave Kenya 19 days notice on May 5 to organise a continental event that carries "gold" status in Tokyo 2020 qualifying.

The qualifying period ends on Monday.

"Elections were more important to them than the welfare of the athletes," said Meukeugni - a view held by a number of other athletes, one of whom said, "They came in for the elections, then flew home and left us to fend for ourselves.

"These people simply do not care about the athletes."

Mehalhel denied that and said, "I support the athletes - we work for them."

He said the WFA had two decisions: push the Championships back until after the Olympic Games, which Oceania did, or put them on at short notice knowing they would not be perfect.

Any delay beyond this week would have denied African athletes a chance to score gold qualifying points and his Board made the right decision, Mehalhel said.

He highlighted the fact that a lifter from Madagascar was able to set a continental record.

About 100 athletes from 14 nations entered, while many stayed at home because of travel restrictions and fears about the spread of the virus in Kenya.

The Kenya Amateur Weightlifting Association, led by double Olympian Pius Ochieng, gained Government support to host the event at Ruaraka Sport Club which was a great achievement in itself.

But the lack of time was always going to cause problems, and Ben Amor Mohamed, technical director of the Tunisian Weightlifting Federation, said there should be an inquiry and that the WFA Board should be held responsible.

"Every nation in Nairobi should make an official complaint," Ben Amor told insidethegames.

He said the WFA officials "who congratulate themselves on their election victories for a fourth term" should go.

"As a weightlifting technician since the 1980s I can see that sport in Africa is going downhill."

A prominent coach from Algeria said on social media that the event in Nairobi was "a crime against weightlifting".

Tunisia will have the strongest African presence in Tokyo in the absence of Egypt, the continent’s powerhouse which is suspended from the Olympic Games for multiple doping offences.

The sorry state of the sport beyond Egypt, Tunisia and Algeria is clear to see in the rankings for the heavyweight events that take place - or not - this weekend.

There is no women’s super-heavyweight contest because there are no entries, and not a single lifter from Africa is eligible to qualify for Tokyo in this weight category.

In the men’s super-heavyweights Walid Bidani of Algeria, the 2019 World Championship snatch bronze medallist seen in the video shot in a car park, is out on his own.

If he finishes in the top eight in qualifying, Africa will have another continental slot for its next-best lifter but, as in the women, there is nobody eligible to take it.

Africa will therefore have to give up one or perhaps two qualifying slots for Tokyo, a situation nobody foresaw, and for which there is no contingency in the qualifying rules.

On the platform, there was a surprise defeat for one of Tunisia’s big hopes when Nouha Landoulsi failed with all her clean and jerk attempts in the women’s 59kg yesterday.

Tojonirina Andriantsitohaina, one of three winners from Madagascar, set the African record with 303kg in the men’s 67kg.

Ben Hnia needed a modest 330kg to win the 73kg by a wide margin.