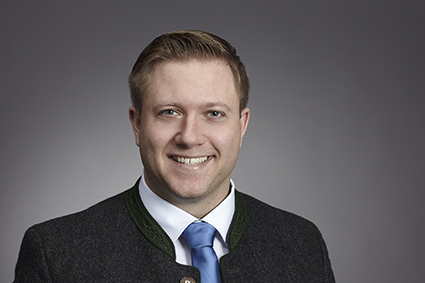 The new President of Germany’s Weightlifting Federation (BVDG) is standing against Intarat Yodbangtoey of Thailand for one of the most senior roles in the sport.

Florian Sperl has spoken out against Intarat’s declaration for the International Weightlifting Federation (IWF) elections in March, saying it sends out "completely the wrong signal".

He also fears that national federations do not understand "the seriousness of the situation in which weightlifting finds itself" and that failure to vote for change would cost the sport its place in the Olympic Games.

Sperl, 33, who took over from the former IWF Board member and clean sport campaigner Christian Baumgartner last month at the BVDG, is standing for the IWF first vice-president position, for vice-president and for a seat on the Executive Board.

Intarat, whose national body is banned from Tokyo 2020 because of doping, is the incumbent first vice-president and is also standing for those positions provided he gets the backing of one fifth of the IWF’s 192 member federations.

Intarat said in a letter to member federations that he was "dedicated and devoted to international weightlifting" and wanted to "continue to work for weightlifting families".

During his time at the Thai Amateur Weightlifting Association (TAWA), Thailand has been involved in three doping scandals.

Seven teenagers were banned for doping in 2011, nine members of its team at the IWF World Championships tested positive in 2018, and last January Thailand featured heavily in the German television documentary that exposed widespread corruption in the sport.

Rattikan (now Siripuch) Gulnoi, a bronze medallist at London 2012 who was secretly recorded in that documentary, joked that she was "the only Thai weightlifter who never tested positive" and said girls aged 13 were encouraged to dope.

This week the International Testing Agency (ITA), which now oversees all anti-doping procedures for the IWF, laid a charge against Gulnoi for prohibited substance abuse throughout her career.

Intarat has strongly denied any involvement with systemic doping and corruption, and TAWA has taken its case to the Court of Arbitration for Sport, challenging the rules that make a national federation responsible for the actions of its athletes and coaches.

A result from that hearing, which took place in December, is expected by the end of January.

Over the past year weightlifting’s image has suffered during corruption scandals that led to the resignation of the long-standing IWF leader Tamás Aján.

The governing body had four different Presidents or Acting Presidents in 2020 - including Intarat for one day - and has three times been the subject of critical comments from the International Olympic Committee (IOC).

In December the BVDG wrote an open letter calling for the entire IWF Board to stand down before the elections, which are due to be held in the last week of March.

Declarations for the Presidency and other roles are due by next Tuesday (January 26).

"Since my open letter, I have had many discussions with Presidents and representatives of other nations and have the impression that not all federations understand the seriousness of the situation in which weightlifting finds itself," Sperl told insidethegames.

"I fear that the next step will be the exclusion of our sport altogether."

Sperl, who oversees major construction projects, said the sport had been blighted by internal power struggles.

"It's time to fight together for our sport, and keep our place in the Olympic Games," he said.

"If people like Mr Yodbangtoey were to be re-elected, it would be a completely wrong signal.

"We must not give doping and banned nations a chance to destroy our sport.

"I do not like or support Mr Yodbangtoey’s candidacy at all.

"If we don't act now there will be no more weightlifting at the Olympic Games - that's for sure.

"In the end, it is our athletes who suffer.

"I stand absolutely for clean, doping-free and corruption-free sport.

"If I am elected, I will fight for this every day.

"The focus is on our athletes, for whom we should work in our committees and boards.

"Self-interest must never be in the foreground."

Germany is represented on the IWF Athletes' Commission by Jurgen Spiess, who is Sperl’s vice-president for sport at the BVDG.

Sperl called for total independence in auditing as well as anti-doping, and said banned countries should not be allowed to vote in elections.

He proposes a maximum of two terms for Board members and other elected positions, and more athlete involvement.

Sperl, a weightlifter since 2004, was vice-president of the Bavarian Weightlifting Federation for four years.