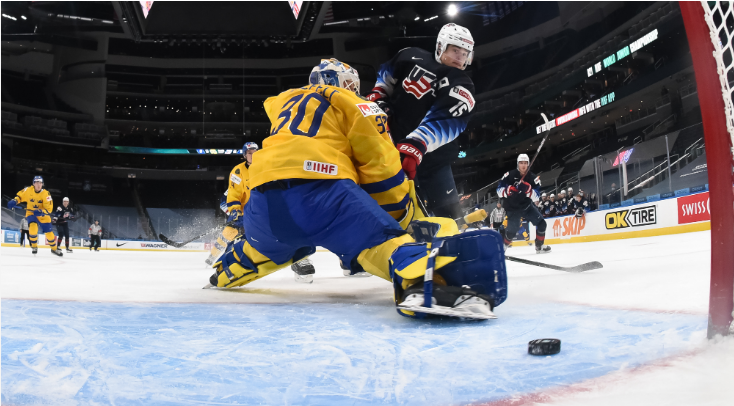 Sweden lost 4-0 to the United States at Rogers Place in the Canadian city.

Tournament scoring leader Trevor Zegras impressed again for the American side with one goal and two assists, although head coach Nate Leaman praised the whole team when the match concluded.

"The strength of this group is that they care about each other and they're playing for each other," Leaman said.

"I think we've got a lot of leaders that will lead at different times in different ways."

The US, who are aiming for their first IIHF World Junior Championship gold medal since 2017, are now set to come up against Slovakia in the quarter-finals.

Sweden are scheduled to face Finland, who were comfortably beaten 4-1 by hosts Canada in their Group A clash.

ICYMI: @hockeycanada came out flying from the first whistle to final buzzer, and levelled @leijonat in the final day of the #WorldJuniors preliminary round. pic.twitter.com/a3JGyDuJkN

The result meant Canada continued their undefeated run and set up a quarter-final tie against the Czech Republic.

In the remaining Group B match, the Czechs thrashed Austria 7-0 to knock their opponents out of the competition.

"We need to follow the coach's game plan and play good hockey.

"We can't be nervous and have to believe we can play with anyone."

Quarter-final matches are scheduled for Saturday (January 2), with the semi-finals set to take place on Monday (January 4).

The remaining two teams will battle it out for gold on Tuesday (January 5).