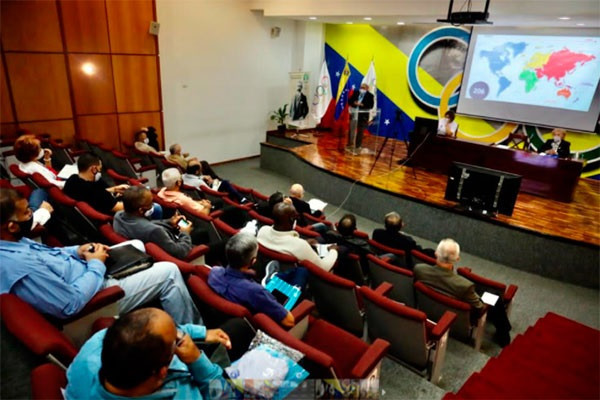 The COV said the Venezuelan Olympic Academy’s "X Session" was usually staged over three days but had to be shortened to one day due to the coronavirus pandemic.

A total of 31 people attended the session in person, including COV President Eduardo Álvarez Camacho and triple jumper Yulimar Rojas who won silver at Rio 2016 and is a two-time world champion, while others joined virtually.

"The technical directors have a great responsibility, not only in the preparation of the national teams, but also in the orientation, monitoring and control of the high-performance of their specific sport," said Eduardo Álvarez.

"We have conceived for some time that the technical director must have a comprehensive and special preparation in many areas, such as planning, doping, administrative, marketing and of course the Olympic movement, which brings together all technicians from all over the world."

Dr Gerardo Vásquez held a presentation entitled "Impact of Olympism in the Fight against Doping in High Performance" before international speaker Silvia Dalotto of Argentina addressed the session.

"What a pleasure to know that they are developing the Olympic Academy," said Dalotto.

"This session is an Olympic school.

"It is a space where we remember that sport is not only sport, it is an education, it has principles and values.

"If we forget that we will be forgetting the Olympic principles, its values and even more so Pierre de Coubertin."

There were also discussions about the Tokyo 2020 Olympic Games which has been postponed to 2021 due to the coronavirus pandemic and other events scheduled for next year.

Rojas and BMX rider Daniel Dhers, who are among 17 Venezuelan athletes that have qualified for Tokyo 2020, also spoke at the meeting.

"What a pleasure to be able to greet you today," said Rojas, who won gold at last year's World Championships.

"This type of session is important so that you can transmit this knowledge to us, thank you and you (COV) for teaching Olympism.

"What a pleasant surprise to know that despite the situation of COVID 19, the matter of Olympism continues to be promoted.

"This has been very gratifying for me.

"The fact of belonging to a movement as respected as this is great."

To close the X Session, Elida Párraga, President of the Venezuelan Olympic Academy, appointed technical director Dominó Dulce Ruiz as the director of this Olympic programme for Venezuela.