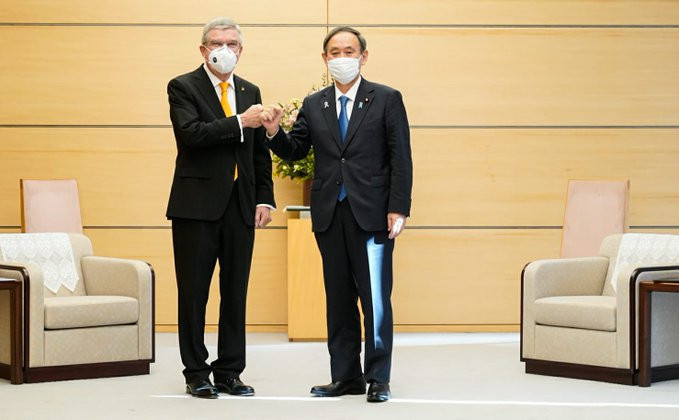 International Olympic Committee (IOC) President Thomas Bach has suggested the organisation will shoulder some of the costs of vaccinating participants for COVID-19 at the postponed Tokyo 2020 Olympic Games next year.

Speaking during his first visit to Japan since the coronavirus pandemic hit, Bach said fans at Tokyo 2020 are likely to require vaccinations to protect the Japanese public but denied claims it would be a requirement for overseas visitors to enter the Olympic and Paralympic host country.

Bach also reiterated his view that the IOC was growing increasingly confident fans will be able to attend the Games, rescheduled to 2021 due to the global health crisis.

Tokyo 2020 organisers and the IOC were last week boosted by the news that a vaccine being developed by American pharmaceutical giant Pfizer and BioNTech has been found to be 90 per cent effective in preventing people from getting the virus after global trials.

Bach, who has previously insisted a vaccine is not a "silver bullet" for the Games taking place, said the IOC was in talks with manufacturers and other health experts but claimed the organisation would not jump the queue ahead of those who need a vaccination most.

"In order to protect the Japanese people and out of respect for the Japanese people, the IOC will undertake great effort so that as many (people) as possible – Olympic participants and visitors will arrive here (with a) vaccine if by then a vaccine is available," Bach said today.

Governor of Tokyo Yuriko Koike meets President Bach: we are strongly determined, together with the IOC, to stage safe and secure Olympic Games. We will not only achieve cost reductions but leave a new model for future generations of how the Games can be organised. #Tokyo2020 pic.twitter.com/Kv9sFC9iUz

"This makes us all very confident that we can have spectators in the Olympics stadium next year and that spectators will enjoy a safe environment.

"The first priority has to be a vaccine for the nurses, the medical doctors and the people who keep our society alive.

"If afterwards a vaccine is available, the IOC would bear the cost so that participants can be offered a vaccine."

Bach held his first face-to-face meeting with Japanese Prime Minister Yoshihide Suga, where the two officials repeated their intention to hold the Games as planned.

The Olympics are due to run from July 23 to August 8, before the Paralympics take centre stage between August 24 and September 5.

"In this meeting, we were totally aligned in the full determination and confidence to make the Olympic Games Tokyo 2020 and the Paralympic Games a great success next summer here in Tokyo," Bach said.

"Together we can make these Olympics Games and the Olympic Flame the light at the end of the tunnel."

Suga, who succeeded Shinzō Abe as Prime Minister in September, "explained that we are making various considerations on the premise of having spectators and agreed with President Bach to work closely together toward realising a safe and secure Olympics".

Organisers are relying on a coronavirus countermeasures taskforce, formed of officials from the Japanese Government, the Tokyo Metropolitan Government and Tokyo 2020, to come up with measures and ways to allow the Games to run as scheduled in 2021.

Bach also met with Tokyo Governor Yuriko Koike for talks on preparations for the Games on the first day of his four-day visit.