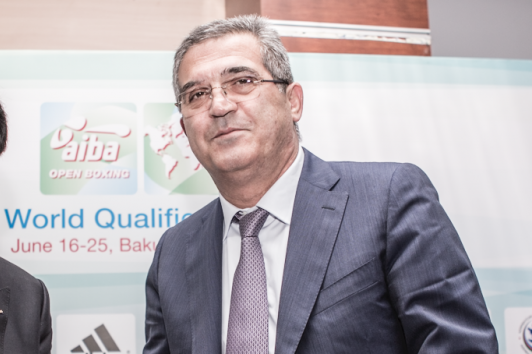 Suleyman Mikayilov, one of four confirmed candidates for the upcoming International Boxing Association (AIBA) Presidential election, has retained Global Sports Investigations (GSI) to receive what he termed "the best external and independent advice in governance and integrity areas".

Richard Caborn, a former United Kingdom Sports Minister who was in that role when London won the rights to host the 2012 Olympics and Paralympics, heads GSI and will be among those advising Mikayilov.

"I am delighted to get the agreement from Rt. Hon. Richard Caborn and the experienced GSI team to receive the best external and independent advice in governance and integrity areas," Mikayilov, who is a member of AIBA's Executive Committee, said.

"I learned that Richard has a deep passion for the sport of boxing himself as he has served before as the chairman of an AIBA National Member Federation.

"He also has a genuine understanding of all issues we are facing.

"His team will help me finalise some significant parts of my manifesto including reform recommendations in the areas of governance, integrity, gender equality and financial management.

"We need to hear independent voices in these crucial areas."

GSI is a joint venture venture between The Sports Consultancy and advisory firm Quest Global.

Governance and integrity are pivotal areas for AIBA to address of it is to restore its status with the International Olympic Committee (IOC).

The IOC suspended its recognition of AIBA in May 2019, stripping it of any involvement in the boxing competition at Tokyo 2020, due to concerns over governance, finances and refereeing and judging.

Earlier this month, IOC President Thomas Bach said the organisation was "very worried about the lack of progress with regard to the governance reforms of AIBA".

Mikayilov has accepted that "we desperately need to take a great leap in these areas".

"I believe in the good governance which will inevitably lead to a more sustainable and impactful organisation to drive forward the sport of boxing," the Azerbaijani official added.

November 2 is the deadline for candidatures, and Umar Kremlev, secretary general of the Russian Boxing Federation, is expected to throw his hat into the ring before then.

The election is due to take place remotely on December 12 and 13.

As insidethegames revealed earlier this month, a complaint relating to an alleged breach of election rules by one of the candidates - Solano - has already been referred to the AIBA Disciplinary and Ethics Commission.

Caborn said that both he and GSI aimed to assist Mikayilov in becoming "the right leader for a new AIBA in the future".

"I am passionate about boxing because of its unique ability to make a difference in society," the ex-Sports Minister added.

I am a former chairman of the Amateur Boxing Association of England and was deeply saddened when the International Olympic Committee stripped AIBA of the right to organise the Tokyo 2020 Olympic Boxing Competitions.

"I believe the time has come to make comprehensive reforms to governance and integrity in boxing, as well as to establish a solid and transparent financial foundation."

He was also an ambassador for England's unsuccessful bid to host the 2018 FIFA World Cup during this time, but after stepping down as a MP was banned from Parliament for six months in 2010 after breaking lobbying rules.

Specialising in ethics and integrity issues, GSI counts the International Biathlon Union and International Ski Federation among its clients.