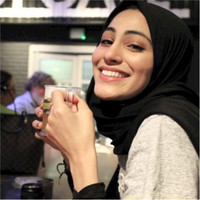 Tawil formerly represented Libya but now serves as a women's football officer for Amnesty International UK, with her role funded by The FA.

She works to get more refugee and asylum-seeking women and girls involved in the game and their own communities across the country.

The FA promoted her work as part of National Inclusion Week in Britain.

"I was working previously in refugee resettlement and I worked at a food bank which had an additional service with a local council on helping resettle refugees in the local area," said Tawil to The FA.

"I initially started off as an assistant and ended up running the programme.

"And I also love football.

"I've always loved sports, I was a taekwondo athlete growing up and competed for the Libyan national team.

"I've always championed women and girls in sport and also discussing and advocating for more diversity in sport.

"So when this role came about, it seemed like the perfect combination of my love for sport and also my work in the refugee sector."