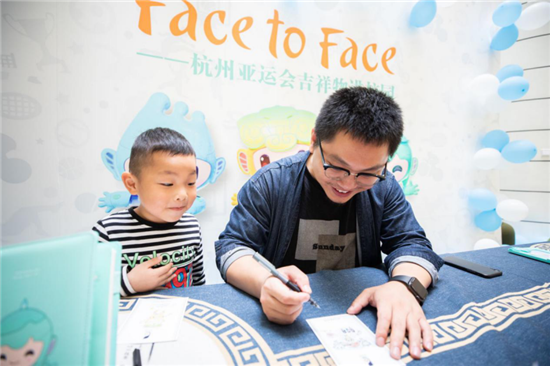 Hangzhou 2022 and Zhejiang Normal University hosted a mascot-themed event to teach children about the culture of the Asian Games.

Zhang Wen and Yang Hongyi, lecturers from the China Academy of Art who created the mascots for the next Asian Games, led the session.

Three robots, named Congcong, Lianlian and Chenchen, were unveiled as the Hangzhou 2022 mascots in April.

They have been dubbed the "smart triplets" and the design was chosen after 4,633 submissions were received, according to organisers.

Children were told of their backstory by the artists and then invited to paint postcards of Congcong, Lianlian and Chenchen.

Imagery of the trio in the local area, encouraging the children to explore nearby cultural landmarks, was also shown.

It is hoped that the sporty mascots will pique children's interest and lead to them being more inquisitive about both the 2022 Asian Games and Hangzhou's culture at large.

The event was held on October 10.

The Hangzhou 2022 Organising Committee says it will strengthen cooperation with schools and other educational organisations in the coming months to raise the profile of the Asian Games among the young.