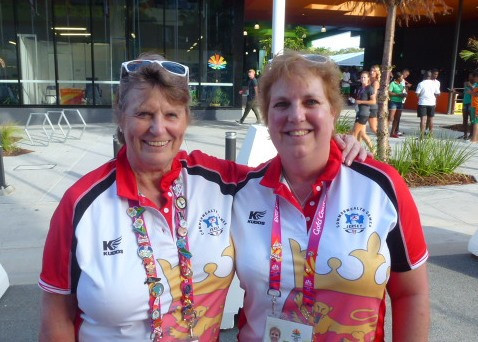 The Commonwealth Games Association of Jersey (CGAJ) has reappointed Jean Cross as its Chef de Mission for Birmingham 2022.

She will be joined by Morag Obarska, who will again act as the island's general team manager.

CGAJ President Paul de Feu expressed his delight at the continuation of the team that was also in place at Gold Coast 2018.

"We are lucky to have hard working and enthusiastic leaders like Jean and Morag," said De Feu.

"They will work alongside our administrator Sophie Le Blond and all the other vital support staff."

A CGAJ Council meeting has looked in detail at the Birmingham 2022 Organising Committee's decision to not have an Athletes' Village.

The Village has been replaced with three accommodation hubs instead.

CGAJ has not yet made a decision on its plans for accommodating athletes, but expects to work with Birmingham 2022 to understand the best situation for its competitors.

The organisation said it agreed the hubs were the best solution due to the COVID-19 crisis.

The Athletes' Village for Birmingham 2022 was scrapped after organisers stated that it could not be delivered on time due to the ongoing restrictions.

The £500 million ($653 million/€556 million) project was being constructed on the former Birmingham City University site in Perry Barr and was set to provide accommodation for 6,500 athletes and team officials.

Instead, 1,600 athletes and officials are set to be housed at the NEC Hotel Campus, with 1,900 at The University of Warwick.

Around 2,800 athletes and officials will also be located at the principal village at The University of Birmingham.

Jersey, one of the Channel Islands, has one gold medal in its Commonwealth Games history, as well as three bronze.

Colin Mallett won the island's only gold at Auckland 1990 in the men's full bore rifle event.

A British Crown Dependency, Jersey is home to around 97,000 people and won its first Commonwealth Games medal in 1962 in Perth in Australia when Albert Turmel won bronze in boxing.