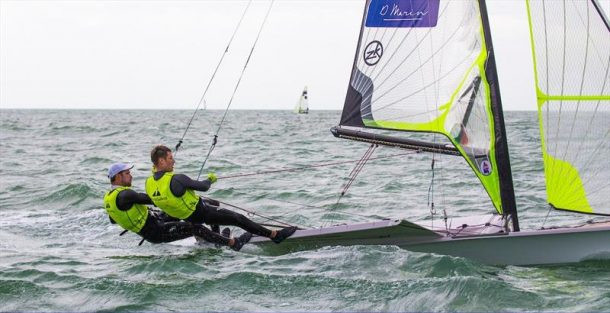 The 2018 world champions got off to a bad start in the first qualifying race, recording an 11th place finish.

They recovered well in the remaining two races, however, earning a first and third place finish to lead with a net total of 15 points.

Tim Fischer and Fabian Graf of Germany are second with 16, having finished first, ninth and sixth.

The European 49erFX and Nacra 17 Championships are also currently taking place in Lake Attersee in Austria.

Germany's Tina Lutz and Susann Beucke impressed to lead the competition on seven after winning two races and finishing fifth in the other.

The Norwegian pair also recorded an eighth place finish, however, putting them second overall on 10.

Klara Wester and Rebecca Netzler of Sweden are third with 10 after finishing sixth and second twice.

In the Nacra 17 contest, Sweden's Emil Järudd and Cecilia Jonsson have the lead.

They achieved a second, first and seventh place finish to sit on 10.

Trailing them on 14 are Santiago Lange and Cecilia Carranza Saroli, with the Argentinian pair claiming ninth, third and second place finishes.

In third overall are Italy's Vittorio Bissaro and Maelle Frascari, who won their opening race before coming sixth and eighth to achieve 15 points.

Competition in all three events is scheduled to continue tomorrow.