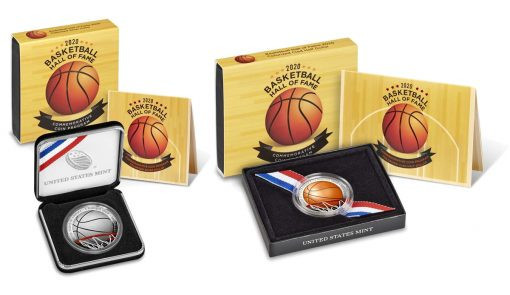 The United States Mint has released its first coins with applied colour to celebrate the 2020 Naismith Basketball Memorial Hall of Fame.

The 2020 class features nine new members, including the late Kobe Bryant, the double Olympic gold medallist killed in a helicopter crash in January.

Patrick Baumann, the former secretary general of the International Basketball Association and International Olympic Committee, who died during the 2018 Summer Youth Olympic Games in Buenos Aires, has also been inducted posthumously.

Four-time Olympic gold medallist Tamika Catchings is another notable name to be inducted.

Kevin Garnett, a member of the US team that won the Olympic gold medal at Sydney 2000, is another inductee, as is the head coach of that team, Rudy Tomjanovich.

Kim Mulkey, winner of an Olympic gold medal as part of the US women’s team at Los Angeles 1984, is also honoured.

The two dome-shaped colourised coins have been issued in recognition of the 60th anniversary of the Naismith Memorial Basketball Hall of Fame.

The non-colourised counterparts were launched earlier in the year.

Never had the US Mint released colourised coins, although they have been common in the rest of the world for a while.

Appearing on the common obverse - heads side - of each coin is a glimpse of a basketball game in action.

Three players are shown reaching for the ball with a rim and net shown behind.

Justin Kunz created the design and Michael Gaudioso sculpted them.

Created by Donna Weaver and sculpted by Phebe Hemphill, coin reverses - tails side - depict a basketball about to pass through the net.

The reverse design of the colourised silver dollar depicts a basketball with black seams about to pass through a white net, with its rim rendered in a familiar orange hue associated with the sport and the Hall of Fame.

The reverse design of the colourised half dollar depicts an orange basketball with black seams about to pass through a white net, with the basketball and net’s rim rendered in two distinct shades of the familiar orange hue associated with the sport and the Hall of Fame.

Reverse inscriptions include “UNITED STATES OF AMERICA” and “E PURIBUS UNUM” along with “ONE DOLLAR” on the silver dollar and “HALF DOLLAR” on the clad half dollar.

These same designs appear on the non-colourised versions of the coins.

Mintage is established at 75,000 coins for each denomination.

The coins can be ordered by clicking here.