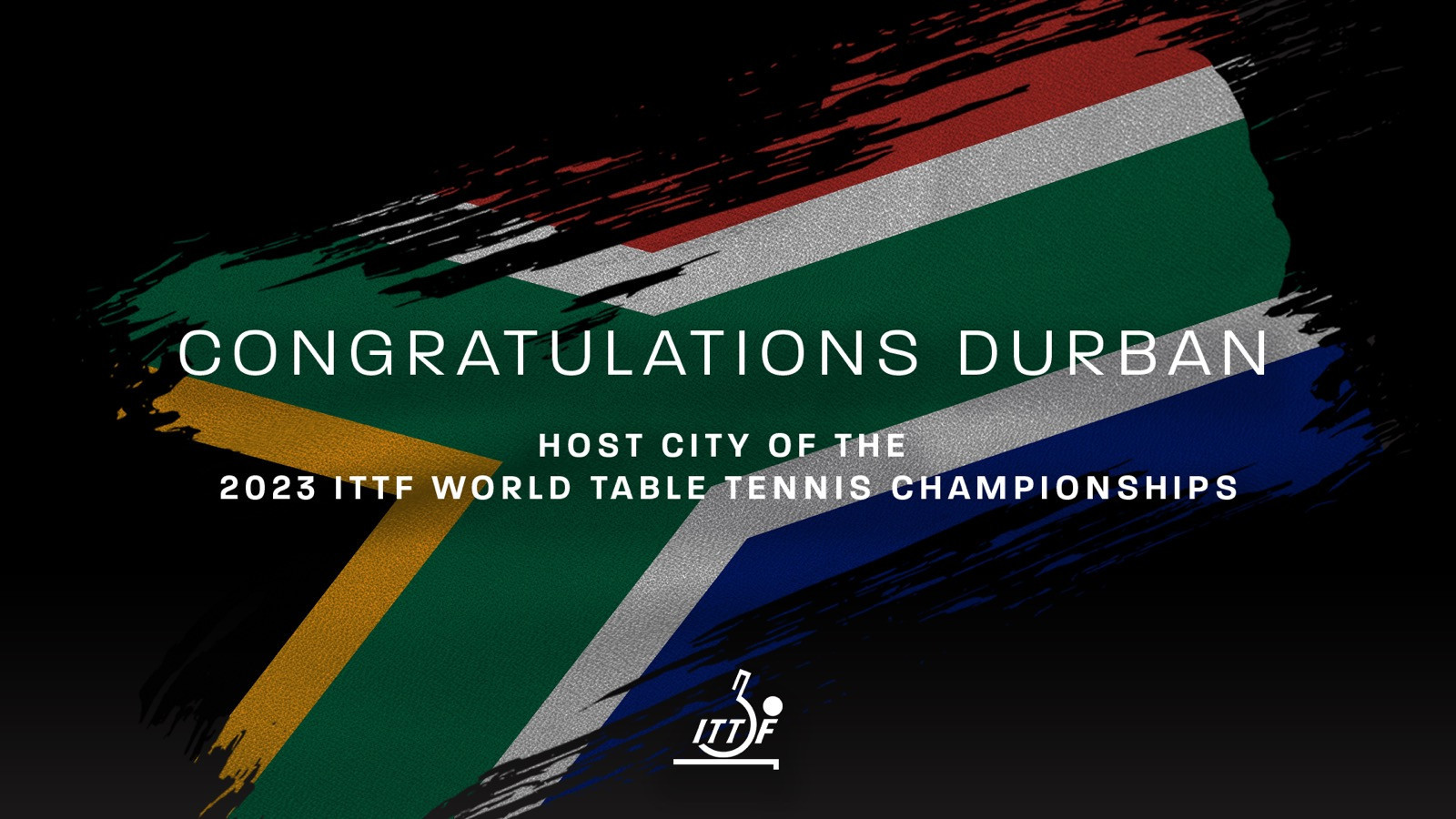 Durban has been awarded the hosting rights for the 2023 World Table Tennis Championships after comfortably seeing off a rival bid from Düsseldorf at the International Table Tennis Federation's (ITTF) virtual Annual General Meeting.

Durban will become the first South African city to host the event after it enjoyed a commanding 90 votes to 39 victory over its German opponent.

The 2023 World Table Tennis Championships will also be the first to take place in Africa since Cairo played host in 1939.

The ITTF's flagship event in 2023 is among the first major competitions to be awarded to Durban since the city was stripped of the 2022 Commonwealth Games after failing to provide the required financial guarantees.

South Africa Table Tennis Board (SATTB) President Joe Carrim said he was "ecstatic" after Durban was announced as the winning bid, adding the "hard work and sleepless nights have paid off".

The Durban International Conference Centre has been selected as SATTB’s proposed venue and is now scheduled to welcome the world's best table tennis players in three years' time.

The result of the vote will be seen as a surprise by some, considering Germany's record of hosting table tennis events, but the SATTB's message of how hosting the World Championships would enhance the status of the sport in Africa seemed to play well with the electorate.

A first ever World #TableTennis Championships is coming to #SouthAfrica in 2023 👏👏👏 pic.twitter.com/pF5UMq3Jgx

Germany has hosted the event on six previous occasions, including twice in the past eight years.

Düsseldorf staged the 2017 World Championships and the German Table Tennis Association claims the city is considered the "table tennis capital".

"I want to thank the world of table tennis and the ITTF for entrusting us with the confidence with the team that we have, the city that we have, and the support from the government that we have to host this event," Carrim said.

"We are certain that we will make everyone who supported us extremely proud of having placed their trust in us to take the baton forward and host a World Championships worthy of the trust that you have given us."

The vote was held remotely as part of the AGM, staged as a virtual event - with some attending in-person in Doha - due to the coronavirus pandemic.

ITTF President Thomas Weikert had been due to travel to the Qatari capital but was forced to join virtually after coming into contact with someone who had tested positive for COVID-19.

The ITTF confirmed Weikert had since returned a negative test for COVID-19.

Aside from the 2023 World Championships vote, the ITTF approved the establishment of ITTF Tribunal, which will take on the disciplinary powers previously given to the Executive Committee.

An ITTF Integrity Unit will also be set up in a move which sees table tennis' worldwide body mirror the likes of World Athletics and the International Biathlon Union.

The ITTF passed a resolution which means candidates in elections must submit no later than 90 days before the vote and agreed to hold an Extraordinary AGM during the rescheduled World Team Table Tennis Championships in Busan next year.

ITTF secretary general Raul Calin told the meeting an Electoral Commission could be formed at the 2021 meeting following advice from the International Olympic Committee.

The Extraordinary meeting is set to be held prior to the ITTF's scheduled AGM in 2021, where the Presidential election is due to take place.

Weikert confirmed earlier this year that he would stand for re-election in 2021, despite previously suggesting he would only serve a single four-year term.

His announcement sparked friction within the ITTF leadership after Deputy President Khalil Al-Mohannadi and executive vice-president for finance Petra Sörling began a campaign to drum up opposition to the German and find a suitable candidate to stand against him.