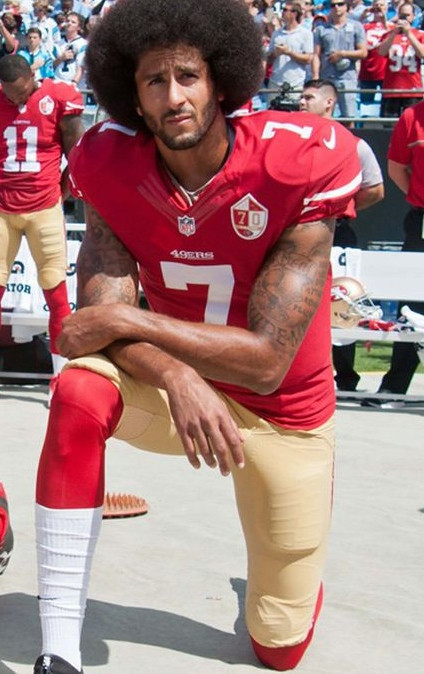 The jersey worn by Colin Kaepernick, the man who was the catalyst for the Black Lives Matter movement, on his National Football League (NFL) debut for San Francisco 49ers nine-years-ago is being put up for auction.

Kaepernick wore this jersey in his NFL debut as a San Francisco 49er on October 2 in 2011 when he entered the game in the first quarter for a handoff to Frank Gore for a five-yard run against the Philadelphia Eagles.

In 2016, Kaepernick knelt during the American national anthem to bring attention and awareness to racial inequality in the United States.

At the end of that NFL season, Kaepernick was released by the 49ers, which led to his present-day banishment from the NFL and his legacy as one of the most prominent figures in sports history worldwide.

In 2020, his positions and actions on and off the field has catapulted him to become a central figure whose kneel became a powerful symbol of protesting racial injustice in the US.

Kaepernick's peaceful non-violent protest garnered worldwide attention and was featured on the cover of Time magazine in October 2016.

In 2018, he signed a multi-year deal with Nike and became the face of the sports brand’s 30th anniversary “Just Do It” campaign with appearances in Nike worldwide advertisements that included the quote, “Believe in Something. Even if it means sacrificing everything.”

His 181 rushing yards against the Green Bay Packers in the first game of the 2012 play-offs remains a quarterback single-game NFL record, and he went on to lead the San Francisco 49ers to the Super Bowl that same year for the first time since 1994.

This Reebok-brand white jersey with red lettering and detailing features “7” on front, back and shoulders in red tackle twill with “Kaepernick” across the back shoulders above the centred “7”.

Kaepernick signed his name on the red “7” on the back in silver Sharpie as well as “2011 Game Worn Rookie Jersey”.

“Today, Colin Kaepernick, now more than ever, transcends sports like Muhammad Ali and Jackie Robinson and other athletes before him, who used their power and presence in the sports arena to take a stand against injustice,” Darren Julien, the President and chief executive of Julien’s Auctions.

“Julien’s Auctions is proud to add this exceptional piece of sports history to our collection of over 500 items from sports icons such as, Michael Jordan and Kobe Bryant, whose influence and impact changed the game and our world.”