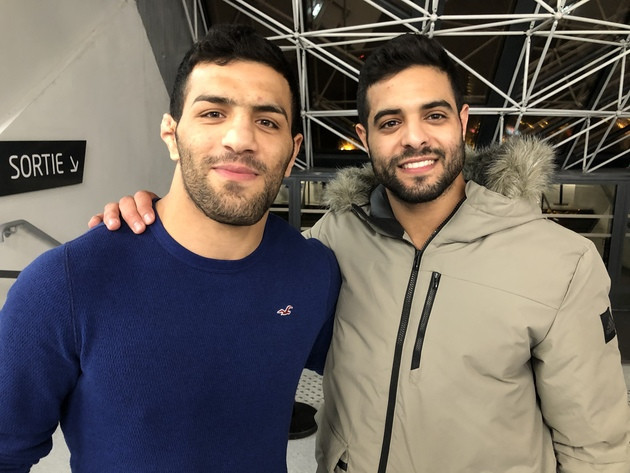 A message of support for Saeid Mollaei has been posted by the Israeli rival he was ordered not to fight by officials in Iran, which led to the country being banned by the International Judo Federation (IUF).

Sagi Muki, who succeeded Mollaei as gold medallist in the under-81 kilograms event at the World Championships in Tokyo last year, released his message to coincide with the start of a hearing today at the Court of Arbitration for Sport (CAS) where the Iran Judo Federation is appealing against the IJF’s suspension.

The defending world champion potentially could have faced Israel's Sagi Muki during the tournament in the Japanese capital.

"An entire country against one citizen, one athlete," Muki wrote.

"Much has been published about this situation and I am proud that Saeid and I are close friends.

"In our conversations he has told me that and his family have been threatened many times and that he has not seen them for more than a year."

The execution in Tehran last Saturday (September 12) of wrestler Navid Afkari, for allegedly stabbing a security guard to death and his involvement in demonstrations against the country's regime in 2018, has led to fears for the family of Mollaei, who remain in Iran.

"What is certain that the execution last weekend of wrestler Navid Afkari, who demonstrated against the regime and for the right to freedom and equality in his country, was intended to convey a clear message to Saeid that this would be done to those who oppose the regime," Muki wrote in his post.

"The requests of world leaders did not help and Navid is no longer alive.

"Even now that I am writing these lines, I am unable to stop thinking about this painful situation that connects to my own life.

"Saeid’s request at the last World Championships was to face me as an equal among equals.

"The regime acted ruthlessly an prevented this as they had in previous competitions where we have had the opportunity to compete against each other.

"Saeid chose to be a free man with no bond, proud of his culture and country, but to continue to be an athlete and judoka, sanctifying liberal values and upholding the spirit of the Olympic Games.

"I pray that he will fulfil his dream of participating in the upcoming Olympics.

"I talked to Saeid at length, encouraged his spirit and strengthened him for the trial.

"This is not a simple thing for him.

"I wish for a day when he can come to Israel and I can visit Iran to meet his family.

"I told him that I will do everything for him, wherever in the world he will be, to uphold his desire to live in peace and security.

"I know the truth will come out and there will be justice in our world and, most of all, I wish that we will meet on the mats, as equals.

"Please, let’s come together in one clear outcry in Israel and around the world, for the Iranian residents imprisoned in their country, with a clear message.

The 28-year-old Mollaei, who refused to return to Iran following the incident in Tokyo and sought asylum in Germany, is the IJF’s star witness at the CAS hearing in Lausanne which is being conducted by a combination of in-person hearings and via video.

He is one of three Iranians giving evidence.

Others include Mohammad Mansouri, Mollaei’s coach and who was due to lead Iran’s team at the 2020 Olympic Games.

He also fled after the incident in Tokyo last year.

Another former judoka, Vahid Sarlak, is also testifying against the Iran Judo Federation.

He fled Iran following the 2009 World Championships in Rotterdam because of Iran’s policy of refusing to allow its athletes to take part in matches against Israelis.

Sarlak was among the favourites to win a gold medal at the 2005 World Championships in Cairo but was ordered to lose in an early match to ensure he would not face an Israeli in the final stages.

Sarlak witnessed what happened to Mollaei at last year’s World Championships where he was coaching the Tajikistan team.

President of the Iran Judo Federation is Arash Miresmaeili, who carried the country’s flag at the Opening Ceremony of the 2004 Olympic Games in Athens and was favourite for the gold medal in the under-66kg category.

But he was drawn against Israel’s Ehud Vaks in the first round.

Miresmaili was disqualified from competing after turning up for the weigh-in two kilograms over the weight limit, something it was claimed he did deliberately to avoid having to face Vaks.

An investigation was launched by the IJF, whose President was then South Korea’s Park Yong-sung, but it concluded that Miresmaili had not turned overweight deliberately to avoid competing against his Israeli opponent.

A final judgement on Iran’s appeal is not expected to be announced for several weeks following the conclusion of the hearing.