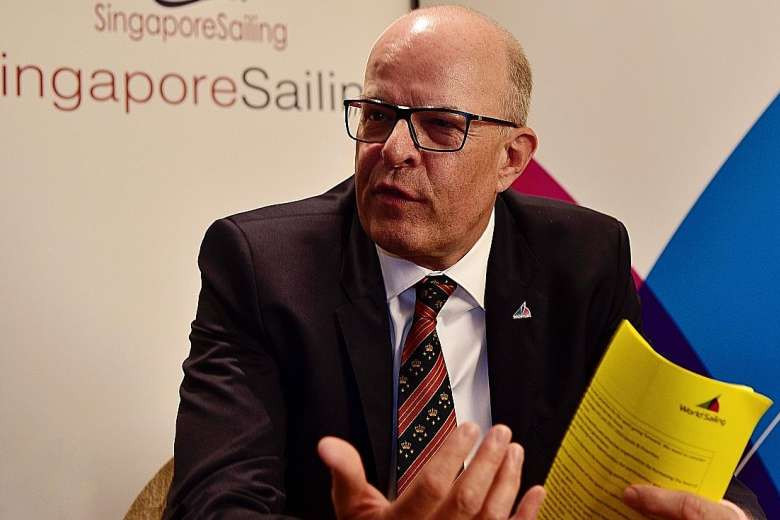 Kim Andersen is set to face three challengers when he stands for re-election as President of World Sailing next month.

Spain's Gerardo Seeliger, China's Quanhai Li and Uruguay's Scott Perry all submitted their candidatures by the time of last week's deadline on September 6.

Li and Perry are both World Sailing vice-presidents, while Seeliger has previously chaired committees on classes and marketing and television at the world governing body.

The results of the ballot are due to be announced on November 1 at the General Assembly, which will be held as a virtual meeting due to the COVID-19 pandemic.

It is unprecedented in recent times for there to be so many candidates standing against an incumbent President in an election at an International Federation and suggests deep dissatisfaction at Andersen's leadership.

The Dane had himself unseated the previous President, Italy's Carlo Croce, in 2016 to become head of World Sailing.

The discontent is best summed up by the 73-year-old Perry, a former President of the Pan American Sailing Federation.

"I strongly believe that in the last few years World Sailing has lost its way," Perry, who is based in Gibraltar and was elected as a vice-president of the International Federation in 2016, said.

"We seem to have forgotten what our Federation should be doing and for whom.

"Even if I didn't always agree with some decisions as a member of the last two Boards I fully accept my share of responsibility for this failure."

Perry has called his manifesto "Back to Basics", which concentrates on finance, costs, governance, events and sailing's place on the Olympic programme.

"For many reasons, not least being the present COVID-19 crisis, our financial challenge and the postponement of the Tokyo Olympics, the next four years will be very difficult," he said.

"In order to tackle all the challenges before us and return our Federation to the correct path we must first go back to basics."

The 73-year-old Seeliger, who represented Spain at the 1972 Olympic Games in Munich, is a former President of the finn class and had been the first to declare that he would stand against Andersen as long ago as last September.

Among the key areas he has promised to work on are leadership and values, strategies and operations.

This includes reversing the controversial move of World Sailing's headquarters to London in 2017, which reportedly incurred relocation costs of £1.1 million ($1.4 million/€1.3 million).

"Return to Southampton or nearby or one of five other free or low-cost options being offered today," Seeliger declares as one of his key manifesto objectives.

Li had been widely expected to stand but had not officially confirmed his candidature until the publication tonight of the list of candidates.

The 58-year-old is a former President of the Asian Sailing Federation and has been a vice-president of World Sailing since 2013.

He was involved in Beijing's successful bid for the 2008 Olympics and Paralympics and helped oversee construction of the Qingdao International Sailing Centre, which hosted sailing during the Games.

Li's ambitions include supporting the growth of youth sailing in new nations to help the sport become more universal.

"World Sailing is currently in a critical condition, facing both financial and development difficulties, that requires strong and capable leadership to not only lead us through the current uncertainty and crisis but, just as importantly, to re-establish and prioritise the interests of all MNAs and World Sailing's stakeholders to ensure we provide the service to the sport which is expected of us," he said.

The 63-year-old Andersen has defended himself against critics of his first term and told insidethegames last month the sport "is stronger than before".

He added that "from increased participation to the growth of our sport internationally as well as increased levels of transparency in our governance, we have accomplished a lot".

Andersen did admit, however, "there is still more to do and we must do better".

There are also 15 candidates for the seven vice-president positions on the World Sailing Board.

The only one of the current members standing for re-election is Jan Dawson, a former President of Yachting New Zealand.

Yann Rocherieux, currently a member of the Board as the chair of World Sailing's Athletes' Commission, has also put himself forward.

Italy's Luca Devoti, the Olympic silver medallist in the finn class at Sydney 2000, is among the most notable candidates.

Tomasz Chamera, Poland's head coach and team leader at every Olympic Games since Athens 2004, is another candidate.

The first round of voting for both the President and vice-president elections is due to be held from October 9 to 16.

In the event that no Presidential candidate receives more than 50 per cent of the votes in the first round, two further rounds are scheduled for October 20 to 23 and October 26 to 29 to conduct run-off votes before the winner is officially announced at the start of November.

If there is a tie between any vice-presidential candidates, a run-off vote is scheduled to begin on November 1 and finish on November 4.