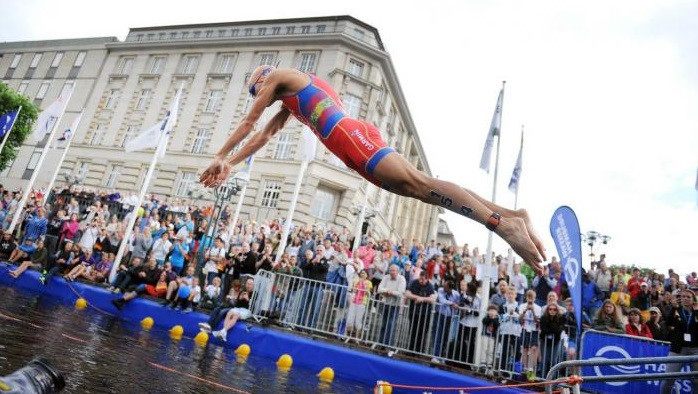 The World Triathlon Series (WTS) is set to return in Hamburg this weekend, with world titles on the line due to the reduced calendar caused by the COVID-19 pandemic.

Usually determined over the whole of the WTS calendar, the event in the German city will decide who will be crowned the 2020 champions following the cancellation of the majority of competitions in the series.

Athletes in the individual event will compete a sprint-distance course in Lake Stadtpark tomorrow, starting with a 750 metre swim, followed by six cycling laps totalling 20 kilometres and a 5km run.

Six months have passed since the the WTS Abu Dhabi event became the first race of 2020 to be cancelled due to COVID-19.

Defending champions Vincent Luis of France and American Katie Zafares will look to win consecutive titles, but will face competition from the likes of Britain's Alistair Brownlee and Mario Mola in the men's, and Bermuda's Flora Duffy and Jessica Learmonth of Britain in the women's.

Luis' teammate Leo Bergere will also look to produce a big challenge in the city that he and Luis won mixed relay gold for France last year.

With Javier Gomez missing from action, Mola and Fernando Alarza will lead the Spanish charge in the men's race.

South Africa's Richard Murray remains one of the quickest over 5km in the field and the shortened distance could be beneficial to him, while host nation Germany will hope for heroics from Jonas Schomburg and Justus Nieschlag, who will look to become the first world champion from the nation since Daniel Unger in 2007.

Another strong runner over 5km is Alex Yee from Britain and could pose a threat near the end if he is near the front with the usual suspects, the Brownlee brothers - Alistair and Jonathan.

Along with Duffy, Zafares and Learmonth, Britain's Georgia Taylor-Brown could be another contender having won her first WTS event last year in Leeds - where she has been training with Learmonth in the rivers around the city.

American pair Taylor Spivey and Summer Rappaport could be outsiders for the women's crown, with the latter securing qualification for Tokyo 2020 having made three WTS podiums in 2019.

The event will also be ran alongside the Triathlon World Mixed Relay Championships, with France aiming to defend their title, having finished ahead of Germany and Australia in 2019.