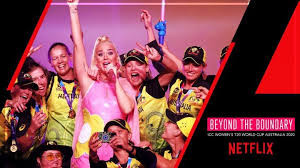 This will celebrate the 17-day tournament which saw record audiences tune in to the cricket tournament.

It has been released today and features the journeys of some of the world's top players at the biggest women's cricket event in history.

"Beyond the Boundary", will show the heroes of the event as well as the highlights of the World Cup, including footage of pop star Katy Perry, who performed at the World Cup final.

The film will be made available on the streaming platform with subtitles in English, Thai, French, Japanese, Malay, Indonesian, Korean, Dutch and Hindi.

It is part of the "100% Cricket" project launched by the ICC.

Played on International Women's Day, the ICC Women's T20 World Cup final was played in front of a record 86,174 crowd at the Melbourne Cricket Ground in Australia.

"We are immensely proud of Beyond the Boundary and we are delighted to partner with Netflix as part of our long-term commitment to growing the visibility of the women’s game and ensuring it has a global platform," said ICC chief executive Manu Sawhney.

"The film captures all the action and drama from the tournament, which set new benchmarks for not just women’s cricket but all women’s sport and gives fans around the world the chance to relive one of the greatest ICC events we have ever staged."

The "100% Cricket" project aims to change perceptions in the sport and looks to build on the success of the ICC Women's T20 World Cup 2020 and leading into the ICC Women's Cricket World Cup in 2022 in New Zealand.

A global unique audience of 89 million was reported at the World Cup which is a 131 per cent increase on the 2018 tournament in the West Indies.

A total of 76 per cent of this global viewing was in India, while live coverage hours went up around the world by 62 per cent to 1,529.

The final, which saw hosts Australia thrash India by 85 runs, was the most-watched match with 53 million tuning in.

In addition to the television figures, there were more than a billion views on the ICC's digital channels, 20 times the amount recorded in 2018.

This was also 10 times the amount recorded at the previous most successful women's cricket tournament, the 2017 Women's World Cup in England.

Only the Men's Cricket World Cup in England in 2019 can be considered more successful out of all ICC events, the governing body claimed.