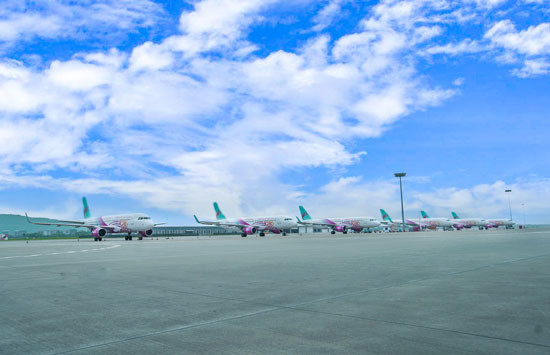 Six planes painted to promote the Hangzhou 2022 Asian Games have been unveiled by sponsor Loong Air.

The jets were showcased by company Changlong Airlines at Hangzhou Xiaoshan International Airport in the Chinese city.

The slogans include the theme of the Games, "Heart-to-heart, @Future" which will have visual renderings in Chinese and English.

Other Asian Games elements are also included on the planes.

Changlong Airlines and Hangzhou 2022 organisers had previously joined forces with a professional design team to create the painted aircraft.

Following the arrival of the first painted Loong Air aircraft on June 15, the whole collection of planes has now been shown with the slogans and mascots for the first time.

On July 21, the Hangzhou-Wenzhou Air Express, which was operated by the Hangzhou 2022 aircraft, was officially restarted between the two cities with a travel distance of just 35 minutes.

It will create a "one-hour traffic circle" in an bid to bring Hangzhou and Wenzhou closer together.

As part of the partnership, Changlong Airlines will expand its summer air routes to Chinese cities such as Wuxi, Dalian, Guilin and Lijang.

It is expected that the aircraft will feature around China and abroad in a bid to boost the profile of the Hangzhou 2022 Asian Games.