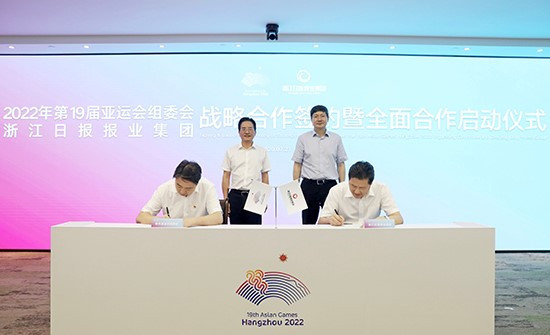 The Organising Committee of the Hangzhou 2022 Asian Games has signed a strategic agreement with the Zhejiang Daily Newspaper Group, in a cooperation move between the two organisations.

The deputy secretary-general of Hangzhou 2022 Organising Committee and Deputy Mayor of Hangzhou Chen Weiqiang, and Tang Zhongxiang, secretary of the Party Committee and President of Zhejiang Daily News Group, both witnessed the signing.

Through this partnership, the newspaper group will look to improve its communication ahead of the Games, as well as build into a bigger media group going forward.

During the signing ceremony, Tang promised that the organisations will carry out cooperation based on the principles of "resource integration, mutual promotion and common development", while integrating all media such as newspapers, internet and mobile devices.

Chen is looking for the partnership to strengthen Hangzhou 2022's ability to host the competition and provide a platform for displaying the achievements of Zhejiang Daily Group's digital publishing and multimedia communication.

He added that he looked for the two parties to create a new Asian Games event with "Chinese style, Zhejiang characteristics, Hangzhou charm, and joint construction and sharing".

In its agreement, one part stated it would aim to strengthen the "integration of propaganda resources", as well as use the traditional media of the news group, hold Asian Games news reports and events promotions and host cultural activities among others.

Hangzhou 2022 also held a work exchange meeting with the Zhejiang Institute of Media and Communication.

Chen in this meeting called the hosting of the Asian Games an "important window" for promoting the city.

Yang Liping, secretary of the Party Committee of Zhejiang Institute of Media and Communication, claimed that it is the responsibility of the institution to participate in and serve the preparations of the Games.

In its next step, the Institute will plan thematic activities for the event and for the city and showcase the Asian Games preparations and urban development of Hangzhou.