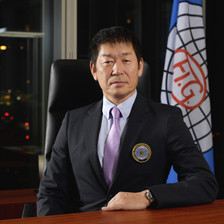 International Gymnastics Federation (FIG) President Morinari Watanabe has issued a message praising the bravery of athletes who come forward with stories of abuse they have suffered, while insisting the governing body is working on initiatives to improve the coaching culture of the sport.

Several gymnasts have published stories of their own experiences, following the release of Netflix documentary Athlete A, which details the abuse scandal in USA Gymnastics involving disgraced former team doctor Larry Nassar and an alleged cover-up by the governing body.

Gymnasts in Australia, Britain, The Netherlands and Switzerland have all made additional allegations of emotional and physical abuse.

Watanabe wrote that the stories had made him "sad", but gave him hope that authoritarian coaching methods will change as a result.

"As President of the FIG, the bravery of these athletes gives me hope," Watanabe wrote.

"It means that there is a genuine will for change.

"It means that some old, authoritarian methods - however successful they might have been in the past - are not tolerated anymore.

"I want to tell the gymnasts who have the courage to speak out that their voices matter.

"I want to tell them that it is never too late to get involved and to push for reform, at any level."

Watanabe continued: "As well as any form of physical violence clearly being intolerable, insults and threats have no place in any training hall.

"Whatever is at stake, gymnastics must remain, above all, a fun sport to practice.

"More can be done to draw a clear separation between what is acceptable and what is not.

"The FIG is working on initiatives to that end.

"We all know plenty of positive tales in the sport.

"Those are the ones that need to be shared and replicated.

"I invite all of you to consider what could and should be done at your own level.

"The FIG can provide the impetus; however, we will manage to foster a culture of respect in the sport only if we make the necessary efforts together."

Watanabe highlighted the establishment of the Gymnastics Ethics Foundation, which was launched in response to the USA Gymnastics sexual abuse scandal.

The Foundation began operating at the start of 2019, with the organisation reporting in November that it had undertaken 28 cases during its first year.

The FIG says the group provides a safe, confidential mechanism to report any form of rules violation, abuse or harassment.

Gymnastics Ethics Foundation director Alex McLin told the BBC last week that there is a cultural problem in gymnastics coaching and said those "with a certain methodology" need to change or leave the sport.

Former Dutch gymnastics coach Gerrit Beltman has admitted to using abuse and intimidation on young gymnasts in an effort to win medals in a newspaper interview with Noordhollands Dagblad.

Ex-gymnast Joy Goedkoop has since accused Dutch coach Vincent Wevers of abuse from the age of seven to 12 during training sessions, alleging she had been "beaten and kicked by him".

Wevers has reportedly said he "will respond later" to the allegations made.

Sanne Wevers and Lieke Wevers, who are coached by their father, are among 10 Dutch gymnasts to have published a statement following the recent allegations.

The gymnasts said their "condolences go to everyone who has had negative experiences in our sport", before outlining their view that there was a healthier climate now in the country.

"As the current National Orange Selection, we value giving our response," the statement read.

"We do not recognise ourselves in the picture that is now sketched of Dutch gymnastics with regard to the stories of the past.

"Where in the past there was room for physical and mental flogging, this is in our opinion a thing of the past.

"Our current team has a healthy top sports climate.

"Of course, as top athletes, we look for physical and mental limits to make a difference and to take it a step further. But above all, there is room for love for the sport.

"We put together our programs together with our coaches and everyone realises that the real difference is made by customisation and responding to individual needs.

"As far as we are concerned, gymnastics has taken the right course in the Netherlands in recent years.

"Of course there is still room for improvement and this space must be used.

"Above all, let's start a conversation and continue to discuss how we can achieve this together.

"We call on the KNGU not to block or break the chosen path. Many beautiful things happen that inspire the next generation and help us enjoy our sport.

"We feel responsible to leave a healthy (top) sports climate for the next generation.

"A climate in which everyone at every level can enjoy the sport in which fun, health and safety are paramount."

The KNGU has called for the FIG to hold a worldwide symposium "as soon as possible" to address coaching culture within the sport.

The KNGU last week announced an independent inquiry would take place examining the handling of reports and the effectiveness of measures already taken.